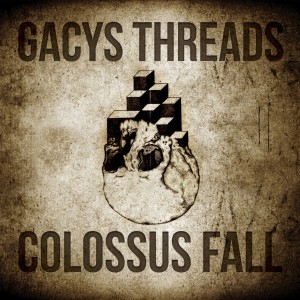 Split EP’s are certainly not a new phenomenon. They have been around for decades, particularly in the punk and hardcore scenes. Since vinyl has been experiencing a resurgence in popularity in recent years, bands have begun to invest in splits with renewed enthusiasm, both as a way to connect with new audiences and for economical reasons.

Savour Your Scene founder Stephen Currie, being both a drummer in a hardcore metal band and an avid vinyl collector (as are his bandmates) neatly fits this profile. Hence the latest release from Gacys Threads is a vinyl spilt EP with Swiss hardcore bruisers Colossus Fall. Brought together by the wonders of social media, the two bands have collaborated on this unique, limited run of just 300 clear yellow vinyl EP’s in order to reach those fabled new audiences and hopefully increase their fanbases.

Side A contains two new songs from Gacys. Opening track ‘Plague Wielder’ really sets the tone; it is raw, crushing and furious. Its lyrics speak savagely of political “whitewash” and the state of the world today. Vocalist Aaron Vance is in fine form as he roars and snarls; the result is angry, visceral and menacing. Continuing in a similar vein is ‘Salvation’: this time the ire is directed at religion (“you chose this one!”). The ominous intro, gut-churning vocals and a powerful break combine to create a classic hardcore metal song with ferociously intelligent lyrics and flowing venom throughout.

Colossus Fall are up next on Side B. Quite a young band compared to Gacys, having only formed two years ago, they are nevertheless seasoned musicians, and it shows. Their first track ‘Bullseyes’ showcases a thrashier, more metal-tinged take on hardcore, although the two bands vocals styles are quite similar. This song contains a fantastic chugging riff breakdown and some snarling, dynamic guitar work. Their songs are more distinctly segmented than the all-out assault of a GC’s number, but lose none of their power for it.

Their second track ‘Never Forget’ is something of a revelation; at four and a half minutes long, it is positively epic compared to the others, and it actually has quite a prog-metal flavour. It also contains some clean vocals, along with the more traditional ‘roar like a bear’ hardcore style. The sludgy riffs are a definite highlight; doomy yet exhilarating, they leave the listener wanting to hear more, more! And then, with an anguished roar…abruptly, it’s over.

So, if the purpose of this split EP is to spark interest further afield for both bands, it will undoubtedly live up to that expectation. Both bands sound at the top of their game here, the production is flawless, the clear yellow vinyl is a great attention grabber and the limited run truly makes it a collectors’ item. For those of us in Northern Ireland, the ‘hopefully in the works’ plan of a double act tour will no doubt be highly anticipated. Will it happen, given CF’s recent Facebook post announcing the departure of their vocalist and bass player? Both have been replaced (the bassist temporarily) but…can the band survive such upheaval? One hopes so. For now, there’s only one thing for it: play it again!