Gasoline Outlaws – ‘No Rules, No Laws, No Regrets’

The list of local bands who are putting their money where the mouths are and recording a full album is growing at an increasing rate. Not for them the ‘single route’ (often little more than a demo masquerading as a single). Not for them the E.P. route still favoured by many and of whom I won’t be critical. Recording is expensive and if you haven’t got 10 brand new tunes you believe in, you shouldn’t be wasting your time and those of prospective fans by giving them an E.P.s worth of good songs mixed in with a pile of filler (though that works for Foo Fighters – meooow!).

Facts are too, and this is the exciting thing, there are more and more bands being signed up to some sort of deal after they have done their own album than those who try to impress through the EP route. The record companies are increasingly frugal and like to see bands invest in themselves first and be seen to be backing their own talent.

Belfast 4 piece, Gasoline Outlaws, are the latest band to back themselves in this way. Having only been together the guts of a year it was a massive leap of faith in their talent – even if the 4 are not spotty faced novices. Brothers Matt and Chris Fitzsimons are well known locally for their work with Black Freeway and Matt’s solo career saw him on the undercard of many a decent bill. Guitarist, Adam Parkin used to play for Yellow Sam and drummer, Adam Callaghan was the drummer for local demi-legends Pay*ola.

The tale of ‘the Outlaws’ goes back to a year spent by Matt Fitzsimons in Australia – he came back refreshed, ‘back with his six-string around his neck’ as he says in the opening lines of ‘Nothing On Me’ and immediately put the band together. They made the difficult but wise decision of not surfacing until they had a full set of original songs to be kicking off with. So if, like I did, you think that all this has come together very quickly, as Matt’s bass player brother, Chris, told me at the recent album launch a LOT of work went on before the band went public in terms of gigs and now with this album.

‘No Rules, No Laws, No Regrets’ shows that this was time well spent.

It was also money well spent because the first thing that hits the listener is how huge the production is on this album. Frankie McClay mustn’t sleep because, once again, his Einstein Studios has been instrumental in releasing a truly professional product that stands toe-to-toe with releases by bands with much larger budgets. He is really the go-to guy locally, if your band wants its songs to sound the way they do in your head. Gasoline Outlaws have a big sound anyway –with Adam Parkin’s chunky Les Paul sound bludgeoning the listener from the first bar to the last. No harm to Parkin’s previous band, Yellow Sam, but the boy has taken a step up in the leagues of local players and McClay has recognised his guitar sound as the platform for everything good about Gasoline Outlaws.

The other major weapon the band has, and this is no way denigrates the wonderful ass-kicking tight rhythm section, is Matt’s voice. His is the kind of voice someone is born with, not manufactured or learned. In terms of Heavy Rock singers, it has similarities with Vince Neill (Motley Crue) or Blackie Lawless (W.A.S.P.) but he is technically a much better singer than either and has a touch of the blues in his raspy vocal, not unlike Janis Joplin when she was at her acerbic best. When you see the band live for the first time, you can’t help but think of the phrase ‘wee man, big voice’ (and hey I ain’t no Andre the Giant either) because it is – it is enormous. The temptation must be great when you have such a potent weapon to over-use it and therefore blunt its edge. Thankfully, he has been astute enough to use it properly, when the occasion requires in a mainly fairly heavy album, but also to show in a few of the lighter moments, that he can sing with feeling and not just power. I think it’s important that he did so or the album would become a bit samey.

As it stands, this is a mighty, consistently high-quality album full of air-punching hard rocking songs that I already know work fabulously well in a live setting, but also I’ve road tested this album and it passed the ‘windows down at the traffic lights’ test with flying colours. Whether you car speakers will pass the same test is debatable, because this album sounds huge by anyone’s standards.

Highlights in terms of one or two songs standing out stronger than others are harder to pinpoint, especially after only a couple of weeks listening off and on. If you are not sure whether that’s praise or a criticism, then let me explain. There is high quality riffing and attitude all through ‘No Rules…’, there’s THAT voice, there’s the pounding, tight rhythms, there are good chant-along choruses aplenty. The overall quality on show is very consistent. What I haven’t yet decided upon is if there are absolute standout moments. The songs I already knew best from the couple of gigs I’d been at are the ones I looked for on the album and sure enough they are done justice by the recording, production and mixing. So, it’d be easy to say the muscular ‘Nothing On Me’, the grungy, vitriolic ‘Lie’, and the band’s theme tune ‘Outlaws’ are the stand outs. But there are plenty of other heavier songs that are just as strong and the lighter moments, namely the slightly more political ‘Stand as One’ and the reflective ‘Someday’ are as good as they are necessary in order to break up the album and save it from being too ‘samey’.

So, to answer my own question I think it is praise that a debut album doesn’t just rely on what, I’ll now refer to as, the ‘Foo Fighters Formula’ of 3 stellar songs per 12 song album, but instead relies on overall consistently high quality across the album. Well done all.

Get your copies from any of these sources. 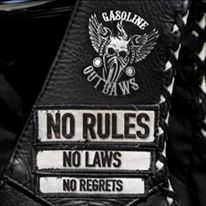