Ghost Maps – The Ocean From the River 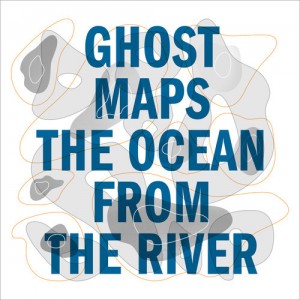 It’s telling that the artist behind Dublin-based Ghost Maps has a background in instrumental music – a former member of instrumental band Halfset, Jeff Martin brings the same languid, cinematic scope you expect from someone used to being afforded space to create nuanced soundscapes; although in this case, the addition of vocals proves to complement – and often elevate – the songs as opposed to being an afterthought.

‘The Ocean From The River’ starts out with the brief, reflective ‘Intro’, a simple, atmospheric piano motif building into an interlude of lush orchestration, before the warm-yet-ominous thrum of ‘The Ocean And A Lover’ gives way to some chiming guitar picking that is best experienced through headphones to get the full effect. It’s at this point that you realise you’re effectively two minutes into the album, and it’s already stunned you with its melodies – as Martin sings the lyrics “unknown beauty always holds such great appeal” in a rich, effortlessly lo-fi voice not unlike that of Sonic Youth’s Lee Renaldo, the line seems strangely prophetic.

‘The Morning Echoes’ has a darker heart contained within it, seeming to suggest that were this a film soundtrack, the lead character might well be regretting a few actions at this point. It’s a testament to the scope of the music that by the time the song hits it’s stride, you have an imaginary movie playing itself out in your head.

Whilst the sheer musical virtuosity on display impresses, standout track ‘Vanilla’ sees Ghost Maps wed this to a perfect, brass-led pop song, its description of some mundane events leading up to the thoughtful chorus that states “you can’t observe anything without changing it”. It’s a startlingly pretty 3 minutes evoking the best of Belle And Sebastian or Death Cab For Cutie whilst keeping its own identity. Following this with the no-less pretty instrumental ‘If I Knew Where I Was I’d Be There’ works, but is an odd move given that the album seemed to be picking up steam, especially since the next track, ‘Echoes Last Forever’ proves to be a better companion piece.

‘Future Portraits’ once again sees the Belle And Sebastian comparison drawn, and briskly moves along with some familiarly-warm guitar, providing the musical equivalent of a welcome, not-overly-tight hug. ‘Hollow Castles’ proves to be more of the same, and if there’s cynicism that creeps in, it’s perhaps because that these songs – each and every one – are quite lovely, but in no real rush to go anywhere. ‘Prevails’ builds from a buzzing crescendo to some tame orchestration, so as a result, the spirited Sonic Youth-influenced indie rock of ‘The Valley’ sounds incongruous on the album, even though it’s a fun listen. As the album winds down with the the more typically downbeat ‘There’, the overall sense is that of a hugely talented artist playing well within a comfort zone, and whilst it’s very impressive indeed, by the end I had the feeling that the movie playing in my head could use a little editing, or perhaps a denouement that lives up to the opening scenes. That said, there are enough moments of very real beauty contained here to make it worth the investment, even if it runs out of tricks before the final act.

The Late Twos – Get Down Before I Pull You Down