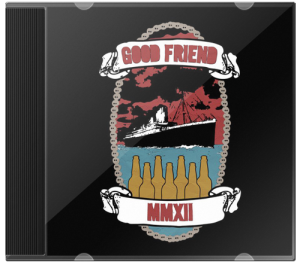 ‘Good Friend’ is the 2012 reincarnation of ‘Under Stars & Gutters’ – however, to imply they simply changed their moniker would be far from the truth. For example, they are now firmly a 3-piece. The biggest difference is the injection of a lot more melody –the songs now seem completely based around the melody, as opposed to relying on clever musical parts; this is a huge plus for me personally.

This is the band’s debut EP, recorded with their long-time producer, Patrick Trolan. The production is slick, concise and suits the band. There’s no auto tune here, rather moments of rawness from vocalist/bassist Adam – the kind of raspyness that you’d get after drinking until 5 in the morning – it’s a great signature of the band and is instantly recognisable.

Opener ‘Dance on, Graves’ kicks things off in style; sounding like early Fall out Boy or Sugarcult. The lyrics seem to reference growing up and the inevitable change that comes with accruing more laughter lines. The song itself doesn’t let up throughout, and ends with the poignant line ‘Let’s dance on fuckin’ graves!’ – what more could you ask for, really?

Keeping the vein of cursing in mind, we reach ‘Oh, Fuck Off Crazy Kev!’. The lyrics are very clever here, dealing with broken friendships and finally reaching an acceptance toward the tail end of the song. There are some great rhythms throughout and a lovely key change toward the end that would make westlife jealous. The song comes in, says all it has to and then abruptly ends – Good Friend don’t feel the need to musically waffle or concentrate on epic breakdowns; and I really like that.

The final track ‘Hospital Walls’ starts with just a guitar and vocal – the vocals are so gritty and emotional; it’s a great introduction. Then, possibly for the only time on this EP; there’s a double revolution of music without any vocals. However, we were just lulled into a false sense of security as adam rejoins his band to sing the song out and ending the EP on a very high note.

My stand out track would have to be ‘Dance on, Graves’ – as it has more hooks than a Velcro factory. It’s a great first introduction to not only this EP, but as the band in general.

Overall; I really enjoyed this EP from start to finish – my only criticism was that it was too short, with none of the songs even reaching the 3:00 Mark. But at the same time, I can’t really give the band any black marks simply for not having any ‘fat’ on their songs. An impressive, energetic, upbeat and well produced debut EP – bring on the second instalment!

Watch: Good Friend – The Return Of Fionn & The Fianna