Hit The B Button – Apartments 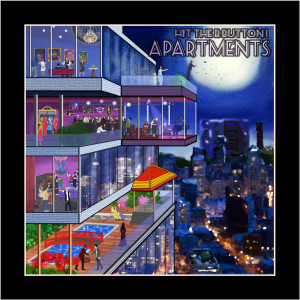 The fact that Hit The B Button are from Belfast by way of Canada, kind of confirms the simple truth of their message expressed via their debut E.P. ‘Apartments’, and that is that life for those in the world stuck in a small apartment with just their gadgets, their games consoles and their imagination is the same the world over.

My appetite for the ‘B Boys’ was well and truly whetted by their single ‘Martial’, which I reviewed for the Singles Club a few weeks back. I found it refreshing how the lads were able to write what I’d call a true Pop/Punk single which totally summed up what that genre should mean – writing a simple-but-catchy guitar-based tune. They made it sound incredibly easy and frankly it totally blew away all of the other over-produced, over-stylized, so-called Pop/Punk that has been sent my way of late. Hit The B Button definitely have a real D-I-Y ethos and, while it has perhaps meant that production-wise the E.P. does not scale any heights, I don’t feel it holds the songs back. In fact, it kind of adds to the charm of the band.

Steadfastly holding to their detestation of being labelled or pigeonholed, ‘Apartments’ shows a band that can experiment with different sounds, from Funk (‘The Ganges’) to Grunge (‘Sorry About This Steven’) and all points in between and yet still maintain a common thread of personality, and never forget to entertain. I think that bodes very well. While ‘Martial’ still remains the song that sticks in my head the most, understandably so, there are no low points on the E.P. and the live version of ‘Oh Olga’ (beautifully explained by the short radio excerpt before it) is a stunning example of how talented the lads are. It also highlights Ledgerwood’s helium-tinged vocals which I have likened to ’80’s pop icon Green from Scritti Politti. Perhaps it is this striking feature that helps tie up all the musical threads into one cohesive unit.