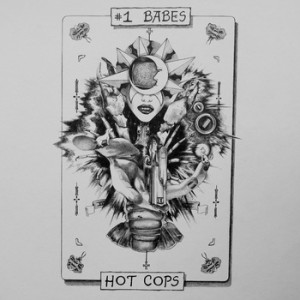 When you are described as one of the hottest talents in Northern Ireland there can be a certain amount of pressure attached to committing to record your musical offerings for prosperity. This collection has an instant feel to it as there is a hook to each tune that evokes a great pop sensibility to the songwriting whilst the vocals bring a contradiction as they temper the sweetness of the sound by tempting you in to the shadows.

Carl Eccles is the man up front and through the delivery of his intelligent yet twisted lyrics he gives the songs a personality that raise the band to a place where you have to continue listening, intrigued as to where the final destination will be. So what do you get with Hot Cops? Well, if you have a penchant for the deadpan delivery of Pavement with a sprinkling of Ash and Pixies then you won’t be far off. They start big with their standout track ‘Fallout’. Ushered in with Nathan Rodgers’ dirty scuzzy bassline, you are brought to attention by the opening chord of the guitar that squeals its intention to be a part of the action. As Eccles’ down tuned vocals take hold, the sound starts to synchronise it’s melody to provide a catchy, chugging backdrop to a tale about someone wrestling with their inner demons.

After such a strong opening track you could forgive Hot Cops for letting up a little but ‘Nightwatch’, ‘Spazzanova’ and ‘Televisual’ are all stand up offerings. The spirit of Pavement is invoked by the start of ‘Nightwatch’ before it transcends in to quite a jolly guitar-led tune that moves along in a pretty inoffensive way even if it is not going to uproot any trees on the way. ‘Spazzanova’ meanwhile matches the dash of Ash with a pinch of Pixies ‘Wave of Mutilation’ as the bass driven sound and low grumble of the vocals is led through a door into a chorus that is positively saccharine after what preceded it. Lyrically astute, it is wordy but feels spacious over the simple up and down of the melody. ‘Televisual’ hints at a quieter end to what’s been before with Eccles intriguing vocal just being accompanied by guitar but there’s no chance of it drifting as Conor Ellison’s drums signal the arrival of the cavalry and a quicker tempo than had been apparent previously.

There must be a bright future ahead for Hot Cops if ‘#1 Babes’ is the benchmark for their ability and with their reference points from another generation of bands, they are sounding unique among today’s current crop.