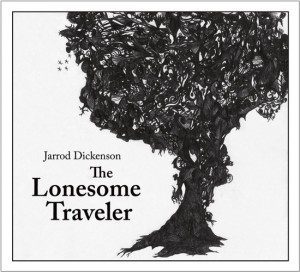 Jarrod Dickenson is a man with a background that immediately stirs up images of a classic American songwriter. He is a previous winner of the Grand Prize at the Belfast Nashville Songwriters Competition. The album title The Lonesome Traveler is an apt one, Dickenson believes that his time playing and travelling through half the states of the U.S. was hugely influential on him – I’d have to agree. Texas-born Dickenson has spent time living in Nashville, LA and currently resides in Brooklyn.

Comparisons can be drawn to contemporaries such as Ray LaMontagne, Iron & Wine or even Bright Eyes. Dickenson’s country-tinged voice lies somewhere between a young Tom Waits and Iron & Wine’s Sam Beam – deeper than Beam but without the whiskey bellows of Waits. The guitar work carries the songs along with that classic sound of folk meets country. Dickenson lists Townes Van Zandt as an influence and it’s the spirit of Van Zandt that runs through The Lonesome Traveler’s veins. Dickenson’s taste for American literature won’t come as a surprise to the listener either. In LA he sought out, firstly the album’s producer, Ryan Freeland (Ray LaMontagne, Lisa Hannigan) and then the session musicians he’d set his sights on. It is the session work that fleshes out Dickenson’s songs, adding classic sounds and tones reminiscent of America’s best songwriters. On the majority of the album these instruments add flavour to the songs, never overpowering the songwriter’s own voice.

The album has a couple of country romps in ‘Ain’t Waiting Any Longer’ and the brilliant ‘Little Black Dress’ which boasts some great guitar and keyboard riffing throughout. ‘Ain’t Waiting Any Longer’ is as close to a typical upbeat country tune as Dickenson gets. And while ‘Little Black Dress’ might not have the delicate lyrics of the quieter tracks, its upbeat country blues and flirtatious theme makes it an immediate stand-out on the album.  The majority of the album however is a much more intimate affair such as ‘I Remember June’ or the album’s closer ‘Seasons Change’, written about his ageing grandfather. It is the only song on which Dickenson plays unaccompanied, proving Dickenson’s awareness – the listener is left to focus on Dickenson’s beautiful guitar lines and melancholic but reassuring lyrics.  The heart and soul of the album are crafted songs such as ‘The Northern Sea’, inspired by John Steinbeck’s The Winter of Our Discontent. The well-worn topic of coming home to one’s sweetheart is handled on ‘Rosalie’ with the sincerity of a man with experience. The themes are classic but sung by a man with a clear appreciation.

The Lonesome Traveler portrays a songwriter confident in his sound and the stories he is telling. Dickenson showcases his influences while crafting the album’s own tone and feel. The album has a very natural sound to it with the extra instrumentation adding texture and filling in the songs with trademarks of the folk genre. This is only Dickenson’s second album but you are safe in the knowledge that he’ll have plenty more travel weary songs under his hat.