Jealous Of The Birds – Parma Violets

Jealous of the Birds - Photo by Robert Brown 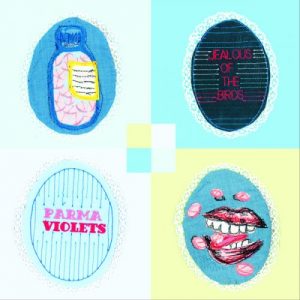 If there’s one Northern Irish musician that’s been making her peers jealous with the plaudits she’s been garnering as of late, it’s 19-year-old Naomi Hamilton. Hamilton’s debut LP – released under the moniker, Jealous of the Birds – has been receiving a good deal of attention and an equal share of glowing praise from local media outlets; her swift rise (which has been pretty astounding for a musician who only began gigging little over a year ago) has also been reflected in an artist residency at this year’s Cathedral Quarter Arts Festival, as well as slots at a number of summer music festivals across the UK.

And you can see why Hamilton is enjoying the success. As we edge into an (always) overdue summer here, this breezy indie-folk album packs plenty of pleasing melodies and super-catchy hooks to soundtrack idle moments in the sun and carefree afternoons spent in the park. There’s a liberal sprinkling of this sort of song on the record – along with some more candid numbers on unrequited love – with the best example of its kind probably coming in the form of the album opener and first single release from Parma Violets, ‘Goji Berry Sunset’. Its fingerpicked chord progression, cheerful whistling and happy-go-lucky lyrics all add up to make an infectious earworm of a tune, which’ll probably be on repeat in your head (especially the whistling parts!) for weeks to come.

But it’s not all pop-acoustic-singer-songwriter fare: the album also contains some more visceral grunge set-ups (see: ‘Russian Doll’ and ‘Trouble in Bohemia’), a melancholy string arrangement on ‘Dandelion’ and some slow, lugubrious piano lines on the title track. Her cover of Nirvana’s ‘Heart-Shaped Box’ – a stripped-back rendition she’s played at several live shows – attests to how well Hamilton’s voice suits this grungier sound, and I think it’d be good to see more of this kind of material on future showings.

Although Hamilton has a warm and wry writing voice – she’s said she hopes her songs “sound like a real friend talking” – one area of the record where there’s some room for improvement is in certain parts of the song lyrics. There are a couple of lines here and there which can sound just a bit too twee – some of the “[Lying] under a mango tree” and “[making] French toast” details on the otherwise very nice-sounding ‘Miss Misanthrope’ – as well as there being a few slightly glib titles in the track list (‘Tonight I Feel Like Kafka’). But this shouldn’t be discouraging, as it’s something almost every young songwriter can easily fall victim to in some way or another. What’s more, the youthful daydreaming quality of the album almost carries these slightly precocious and postured shortcomings to the point where it becomes harsh to dwell on them.

On the whole, this is an impressive start to a music career that could really take off (even more than it already has…), especially on the evidence of some really assured live performances Hamilton’s recently done in Belfast. Parma Violets is an enjoyable and promising debut, well worth sticking on as things begin to brighten up in this corner of the world.