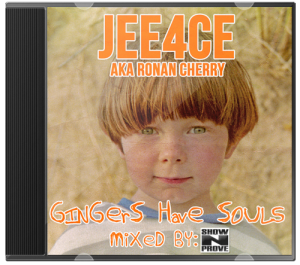 Northern Ireland is not a part of the world normally associated with fresh hip-hop, but in the past few years, the music scene has seen a number of acts. One such act is rapper and producer Jee4ce AKA Ronan Cherry. Produced by UK Producer Show ‘N’ Prove, as well as Jee4ce’s producer alter-ego Father Jack, Gingers Have Souls is a refreshing, unique concept album that is deeper than first impressions might have you think.

Gingers Have Souls could be easily be mistaken for a rather tongue-in-cheek hip-hop album, particularly through its use of sampling media clips that slate the world’s population of ginger people out there. Front and centre is the now infamous Youtube video, from which the album takes its title, giving the album a real DJ Yoda feel to it. Some songs use these unorthodox samples to the extreme, for example, Load the Spaceship contains a duet between Jee4ce and the wrestler Ultimate Warrior. Gingers Have Souls is a fun upbeat album that gives “something original, not the same blind tunes.” However, dig a little deeper and it becomes clear that Gingers Have Souls does more than poke a bit of fun at the artist’ own woes.

It doesn’t take much digging to hit the real payoff of the album when Jee4ce gets down to the nitty gritty. Gingers Have Souls represents Jee4ce’s own musical journey depicting what it’s like being a white, ginger hip-hop artist in a music scene that is dominated by pop, rock, indie and metal. Buzz very rightly justifies his skills and validity as a hip-hop artist particularly when you take a look at the artist’s background, growing up in a country that has had share of trouble over the years. The final track of the album, Long Shot is an optimistic summery tune that demonstrates Jee4ce’s acceptance in his own skills as a genuinely talented rapper, in a world and market that may not be so quick to give him a chance, stating “in a million I might be the one.”

Northern Irish rap can sometimes be a difficult listen, particularly when the accent overpowers the lyrics. This is not the case for Jee4ce who seems to have perfected this skill and combined it with a variety of flavours in order to plot a musical journey through the artists’ various hip-hop influences. Give Ginger Have Souls a listen and if anything, it proves there’s at least one ginger out there with a little bit soul.