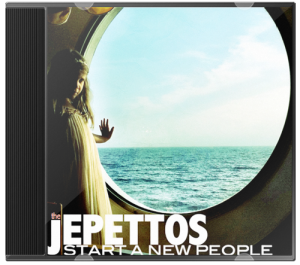 The Irish music scene is in fine fettle at the moment, especially in Northern Ireland where all these new bands are coming to the fore and trying something new. NI has always produced some great bands over the years from Ash and Snow Patrol to The Undertones. The most resent band making a splash in the mainstream is Two Door Cinema Club from Bangor. Their debut album “Tourist History” won the Choice Music Prize back in 2010.

Released on 6th January this year “Start a new people” is the debut EP from Northern Irish 5 piece The Jepettos. The band is fronted by husband and wife duo Mick and Ruth Aicken. They produce a fine folk experience rock akin to the likes of Laura Marling, The Civil Wars, Lisa Hannigan and Sufjan Stevens. They also share similarities with Heathers with the dual female vocals Ruth shares with Emma Flannigan who also plays clarinet and recorder. The 5 piece is made up with Colm Hinds on bass and Daniel Kerr on drums.

The band take their name from Geppetto, the Disney character and woodcarver who made Pinocchio. Their name is spelled differently but pronounced that same. Mick from the band said on Cool FM radio recently that Geppetto tried to bring the wooden people he carved to life and that that’s what the band are trying to do with their instruments “bring the wooden instruments to life”.

The first line of this album, from lead single “Goldrush” really sets off the brightness that shines from this set of songs (“When the morning comes, it’ll be okay”). The flutters of clarinet and dual female vocals add to this effect beautifully. A certain Duke Special guests here on piano. On the recent issue of Hot Press the band get a good mention and this song appeared on the accompanying CD.

Despite “Goldrush” being the lead single the best song here is “Something in the air”. This is a beautiful lament with slight flickers of electric guitar and Mick’s backing vocals really coming to the fore. This song includes the line where the EP takes its name.

Third track “Journey” has a slight country music feel to it. You can really notice the Lisa Hannigan comparisons here – a short, cutesy folk song similar to those on the Juno movie soundtrack. It’s made incredibly sweet by the backing vocals of Mick and Ruth’s daughter Freiah-Beth.

The weakest song here is “Should’ve kissed you more”. This song is about getting over a relationship break-up and features a guest appearance from Jonny Leddy on trumpet. “It was a starry night, shining above your head, stinging my bloodshot eyes” Ruth sings at the start of album closer “Good Times”. This is a cracking little song to end the EP. You can really hear the Northern Irish accent in Mick’s voice.

I for one am really looking forward to seeing them play live. Mick and Ruth played with another band in the past called The Lowly Knights and supported Snow Patrol back in 2009 so they have some experience with playing to larger crowds. A video on YouTube sees the band playing “Should’ve kissed you more” in what looks like someone’s hallway together. You can really see that they are all very connected. There seems to be great chemistry between then especially when you see Mick and Ruth face each other during the track.

There is also another Lowly Knights connection. David Clements recorded and mixed “Start a new people” was also on mixing duties for The Lowly Knights EP “The Rifles” back in September 2008.

I happened to be driving through Dublin city centre while listening to this in the car. It was a particularly sunny day and The Jepettos seemed to fit the scene perfectly. Let’s hope that they continue for many years to come.

◀ STANDOUT ⁞ Something In the Air ▶
◀ CONNECTION ⁞ Lisa Hannigan ▶