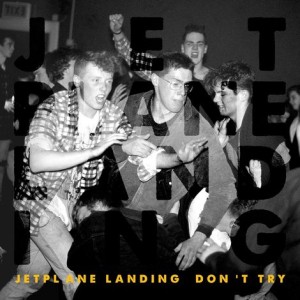 After an “indefinite hiatus” Derry/Londonderry/Stroke City’s Jetplane Landing’s first album in 6 years opens at a frantic pace with ‘Cheapskate Tricks for Worn Down People’ and its anthemic cry of “I want power of attorney” and all of a sudden Fighting With Wire’s decision to call it a day is (mostly) forgiven.  (The lineup now includes ex FWW drummer Craig McKean, an excellent addition and meaning 66.67 to 2 decimal places of FWW are now in the band).  Musically the song is a great slab of post hardcore with a guitar sound and riff that will lodge in your brain and refuse to leave it any time soon.

The lyrical inspiration behind blistering second track ‘Beat Generation…Ha’ is obvious from Ferris’ threat of “Hey maggots get off my turf, I wrote shit like this fuckin’ years ago”.  A blistering opening duo of songs, and the pace continues with the first single, ‘Radio Heart’, which could be renamed “Radio Hit”, with guitarist Cahir O’Doherty’s pop sensibilities and seemingly infinite knack for writing a perfect tune stamped all over it.  Fans of old school Jimmy Eat World will lap it up, in an ideal world this is the kind of tune that would be receiving non-stop music channel airplay a la Nirvana circa 1992, it really is that good.

‘Walls of Derry’ is full of references to the boys’ home city, and a great pop tune propelled by an enormous post hardcore riff and containing some passionate backing “woah oh oh oh’s”).  There is a brief return to the more funk sound of the previous album, propelled and held together by a tight rhythm section and huge bass sound. On the whole though this is an album full of gargantuan hooks and choruses that implant themselves firmly in you brain and refuse to leave, testament to the song writing talent within the group and the great production job.

‘Broken by People’ is ANOTHER highlight, in an album full of them.  Lyrically there are some great lines on offer here, alongside some truly original song titles (‘Man with a movie camera trapped inside his head’ exemplifies both perfectly).  But this is not an album surviving on great song titles, the previously mentioned song is another truly great slab of post hardcore with a guitar sound Page Hamilton himself would be proud of.

Surely a contender for NI album of the year (actually scrap that it’s my favourite album of the year from anywhere), a raw sounding and energetic collection, these songs will sound huge in a live environment.  An excellent return from a much missed band, don’t leave it as long the next time!

Our Krypton Son – Can’t Make You Come Back