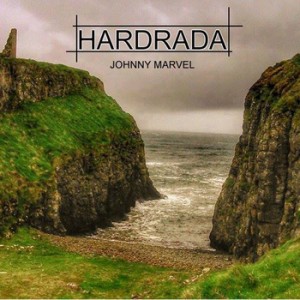 The hard-hitting Hardrada is the second release from North Coast trio, Johnny Marvel, but unlike their well-received debut of last year, BlissfulHatefulBeautiful, this EP is a conscientious attempt to break away from their well-worn trademark sound of accessible, summer-tinged pop-rock. So how does this ambitious experimentation with elements of heavier metal (and even time signatures prevalent within math rock) fare the three-piece that were previously such avid purveyors of surf rock?

‘Tir Cannan’ opens with a tentative guitar track, before roaring into life and echoing The Xcerts from every orifice. The verses are a little stilted sounding, but this is more than made up for by the rousingly angsty choruses and the forceful breakdown/outro, courtesy of Jack Stewart’s (lead vocals, bass) vocals converging constantly with Leo Clancy’s (guitar, vocals) rather impressive guitar work. After a promising start, where their reach only just exceeds their grasp, Johnny Marvel really settle into their new, heavier groove by the time “Breakdawn” is unleashed. Building on the powerful basis provided by Henry Schwittay’s carefully executed drumming, the riffs lend themselves to showing off the band’s impressive, newly honed ability to toy with varying tones, time signatures and dynamics alike, which is a highly admirable feat indeed.

Closing with the questionably titled ‘Truffle Hunt’ (and no, contain yourself- the lyrics don’t bear any explicit references to hunting for the fruiting body of a subterranean fungus that happens to be a hallmark of fine dining) which is a fairly pleasant, if relatively more mellow track. More evocative of Biffy Clyro than Tool, it serves to exemplify Johnny Marvel’s musical versatility.
“Hardrada” has well and truly separated Johnny Marvel from every other Red Hot Chili Peppers sound-alike this side of Belfast, proving that their ambitions, capacity for successful experimentation and not least, their musical ability, are certainly not to be underestimated by any means.