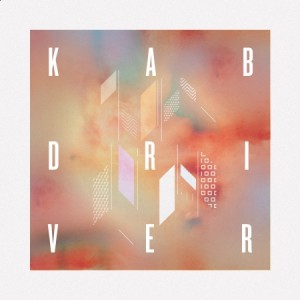 When your work is held in high esteem by none other than the legendary Laurent Garnier you know you are going to be in for a treat. Belfast based music producer David Baxter has descended upon us with a debut that is slick, detailed and rich in it’s variety. Under the pseudonym Kab Driver, Baxter has delivered a metallic, funky, robotic mix of fourteen delicious tracks to sink our teeth into.

We are greeted, unsurprisingly by ‘intro’, a glacial number that pulls you in and out as it builds towards the the blustery ‘IMTDFM’ a funky number that chirps synths at the listener with explosive drum beats and whispered, disjointed vocals. There is an unmistakeable groove that filters right in to ‘Never Say Never’ which clearly has a license to kill. The cyclic rhythms are hypnotic and Baxter makes excellent use of the robotic vocoder. The beat is intoxicating and in a genre as filled as House, Baxter is certainly not riding on the coat-tails of others, even if there is a lot of SBTRKT and Booka Shade on display here.

The dub-step infused ‘Batteria’ featuring Boxcutter and Brian Greene is a rather busy track, but it works. Cymbals crash, drums repeat with ferocious energy all while Greene’s vocals offer a semblance of order, keeping everything in check and adding a nice clean sheen of professionalism. The variety continues with the Passion Pit inspired ‘Transistor Array’, a track that shows the multitude of skills Baxter exhibits in order to create a dreamy, tight soundscape that flips from 80’s funk to modern electropop effortlessly and often without the listener realising that you have finished one track and are on to the next. It’s seamless at times and quite remarkable. ‘Hares Gap’ is electro jazz at it’s finest, feel’s like Prince is slappin da bass and Baxter is unashamedly and rightfully using these musical legends to create something brand new and exciting.

The tempo slows but the electro funk continues with ‘The Mule’ with rhythms that duel and intertwine. Beats bounce of each other and the intelligently used vocoder makes a welcome return before we delve into the complex ‘Wanted This’. The real strength of Baxter’s maximalist electronica is the utter subtlety on display. Every time you listen and re-listen you hear something new. You hear a new synth here, vocals layered over drums whist synths dazzle all around yet the ambience simmers delicately, occasionally reminding the listener that it’s still there keeping everything together.

A brief interlude calms us down before the latin infused ‘Headhunter’ restarts proceedings with a foreign funk that was nowhere to be found earlier in the record. Daft Punk and Chromeo are the inspiration on display here. It is easy to condemn the similarity of the samples exhibited but there is enough innovation and exploration of new ideas to forgive and forget. ‘Garçon’ is a track to strut to, it is filthy in its’ electro, it clicks and rotates with mechanical efficiency. There are eerie noises that are clearly from another world and with the vocoder at full blast, we have a track that rises to a futuristic crescendo.

‘Ormeau Strip’ begins to wind the album down with a dark ambient effort that is simply ultra cool, the simple one-two beats make way as Baxter lays down more beats and chords that again show how subtle alterations can change the texture of a song in a matter of moments. ‘LTX’ throws some sultry jazz our way inter-spliced with jumpy splashes of heavy synth. It’s an ultra sexy track with some Liz Enthusiasm tinted vocals sprinkled throughout.

‘Outro’ sends us off with the feeling that we have just experienced something quite special.  This album wont win awards for originality, you could easily name twenty artists that influence this record but that is not the point with this. It’s a record that has been so finely crafted you can hear every subtle nuance, every tweak is intentional. There are references to over thirty years of vastly differing music styles brought together in the most joyous marriage of convenience. We have been treated to a stylistically sophisticated debut that deserves some serious recognition and a release that shows the electronic scene in Northern Ireland is as formidable as the current spate of indie rockers dominating the headlines.