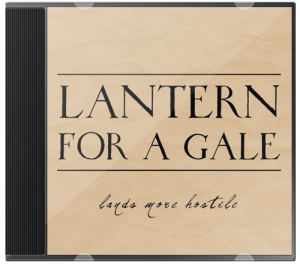 North-coast Hardcore five piece Lantern For A Gale release “Lands More Hostile” in a follow up to last years self titled debut EP. Clocking in at just over 25 minutes its more mini album than EP. Already leading lights with Northern Ireland’s hardcore scene this release has the potential to LFAG to the next level.

It’s a ferocious kick off with lead track ‘As We Sleep’ serving up snarling vocals, driving guitar and a pulsating rhythm section. It sets the tone for the rest of the mini album. There’s an underlying classic hardcore sound here, but Lantern For A Gale take it to the next level, mixing harsh riffs which disguised melodic riffs. By second track ‘Inathentic Selves’ you can already recognise that there is a distinct improvement upon last years self titled debut. There’s a harsh vocal and guitar intro to Inathentic Selves, but over the six minute duration it develops into a harmonic hardcore super song. At times Paul’s scream wavers scarily close to singing.

The guitar work is great through out, with the dueling guitars of Danny and Andy providing a gritty template. The riffs are gloriously heavy and harsh pummeling your ears then comes the lighter more the melodic riff over the top to solidify these songs somewhere between American hardcore acts La Dispute and Trash Talk. ‘Interpreting Nothing’ showcases the bands range bring influences in from across the hardcore scene.

‘Against Diabolum’ is the mini album’s stand out track. Carrying on the pure aggression it is jam packed with excellent heavy riffs, drums and bass pounding from the outset it grabs you by the throat, only giving you a brief rest bite around the 1 minute 18 mark. Again the duel guitars work wonderfully the heavy riffs being complemented by the sweeter guitar parts.

For a lesson in excellent hardcore guitar work skip straight to track 5 – ‘Punctured Equilibrium’ – the opening melodic and slow riff is a beauty. It then breaks down several times only for it come back and punch you right in the kisser. The first-rate guitar work is evident throughout the track listen in at 3 minutes 21 for something special.

This release can easily put Lantern For A Gale in the upper echelons of the UK Hardcore scene. It’s taken me by surprise sum what, Lands More Hostile is a big step forward for the band perfecting their melodic hardcore sound. It’s highly recommended that you pick this album up, even if you think you don’t like hardcore this might just turn your head.