by Eamonn McElevey
in Music Reviews 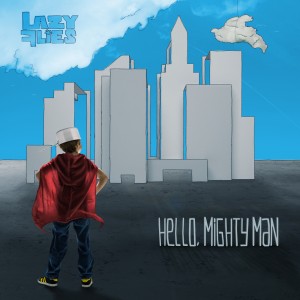 “Pack up your dreams and fold them away” is the opening line of the first track on Hello, Mighty Men and sets the scene for the EP’s wonderfully inventive lyrics and imaginative, if often ambiguous, storytelling, a trademark of one the band’s main musical inspirations, David Bowie.

Lazy Flies is Dave, Graeme and Steve, three brothers from Belfast who have released this EP following the success of their 2013 cut ‘Kill Your Darlings’. Their closeness as a band is mirrored in their interweaving, multi-layered harmonies, reminiscent of the close harmony singing heard on The Beatles’ Abbey Road and other records from the late ‘60s. The tight harmonies really bring to life their intelligent lyric writing. The band certainly has a way with words and a great sense of humour to boot, which is apparent throughout (see the bios on the band’s website for a fascinating insight into their personalities!).

On ‘Ghost’, the band asks us to “pack up our dreams and fold them away” and indeed, the string writing on this dreamlike track is lush. Distant piano parts are anchored by a pronounced bass line and jaunty percussion and this daydream continues in ‘Of All The Things’. There is something intrinsically ‘summery’ about this track. It is another multifaceted cut with perhaps the most pop-feel of all the tracks on the EP and a real hark back to the music of the 1960s, with of flecks of psychedelia. The ambient opening of ‘Gentleman Blak’ could almost be from an Aphex Twin track. Beautiful in its simplicity, the instrumental writing here is delicate, most especially in the fragile piano writing. Again, rich vocal writing adds warmth and just as you are settling into the track, it ends, fading into the aether. The more upbeat ‘Chuck Connors Is The Colonel’ showcases the band’s flair for writing beautifully crafted melodies. Supported by warm strings and understated percussion, their vocals are on point and this is perhaps the most instant of the five tracks. Be warned though: the ‘aahhs’ which make up the chorus are too catchy and will be stuck in your head. ‘Luminary’ closes the EP. The lyrics here are stand out, the band instructing us to ‘capture the moon and lasso the stars for our own.’ Listen out for the subdued guitar solo, which emerges from the dreamy soundscape about halfway through.

Hello, Mighty Men transports the listener to another place, another era. Less is more on this EP and it is sadly over before you know it, lasting only around fifteen minutes and leaving you wishing there was more. Expertly crafted and with a real sense of authenticity and genuine musicianship, it is definitely a collection I will have on repeat over the (hopefully sunny) upcoming summer months.