by Robbie Nolan
in Music Reviews 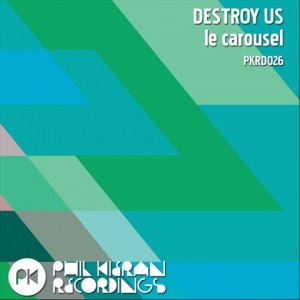 In 2013 musical polymath Phil Kieran released upon the world ‘Le Carousel‘. Previously best known as a purveyor of fine techno, under this new moniker Kieran was free to expand his sonic palette. Le Carousel’s debut album was to be informed by elements of indie, funk, and electronica, and was met with widespread critical acclaim. Fast forward two years and we find him continuing to explore similar territories with his latest EP, ‘Destroy Us’.

As the title track begins we are treated to an extended intro of blissed-out chords. Synths, bass, and guitar emerge slowly from the sound-mist, drifting in space before being snapped into position with the arrival of a chic 4/4 drumbeat. With the drums comes a transmutation, as the song becomes a psychedelic space-disco juggernaught, with calls of “Destroy us!” left echoing defiantly in it’s wake. “Shoegaze” is a term often applied to Le Carousel, and there is certainly an attention to detail in Destroy Us worthy of Mr Shields himself. Depth, balance, and nuance characterise the sound, traits which are available only to the meticulous.

This should come as no surprise as Kieran is an artist known for his mastery of production. It should also come as no surprise then that he should have chosen two such likeminded individuals for the remixes which make up the rest of this EP. First up are ‘Hardware Bros’, who come with a more dancefloor friendly offering. Synthesised arpeggios are brought to the forefront in a Moroder-esque disco treat.

‘Timothy J. Fairplay’ on the other hand teases out darker electro vibes which slowly accumulate in the creation of a retro-noir soundscape. Not only do both work as stand-alone tracks, but also, like all good remixes, lend fresh perspectives on the original. Taken as a whole these three tracks create a highly enjoyable and versatile record, suited to both the headphone and dance floor listener.

There are rumours that Destroy Us is simply a taster of things to come, if this is a case then Kieran can consider our appetites throughly whetted. To summarise through that most noble of mediums, the woeful pun : Le Carousel, definitely worth a few rotations