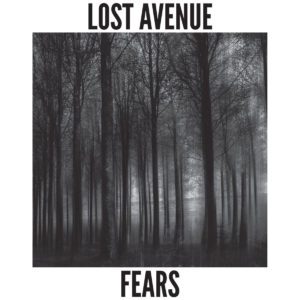 It would seem in modern months, we are spoilt for choice when it comes to the punk rock renaissance happening in Derry. It would appear that every other day there is new EP or album coming out of the walled city, the latest of which coming from indie punk three-piece Lost Avenue (LA). Their newest album Fears has the pedal to the metal from opening to ending, capturing the spirit and furore of punk without sacrificing the indie hooks that make their choruses so addicting.

Album opener and titular track ‘Fears’ sees LA announce their intention to the world, heavy riffage and dangerous licks. Nearly half a minute passes before any vocals are heard, only for signer Dylan Bradley to roar into life. Bradley’s voice, at risk of being drowned out by the avalanche emanating from drummer Michael Brown, rises to the task, as powerful as it is magnetic. Almost against my will, I could feel my legs start to tap as the goosebumps travelled down my arms, anticipating the breakdown. Straddling the line between heavy and bouncy, Fears did as every good opener should do, left me hungry for more.

The issue with many punk bands is two-fold: repetitiveness and production. Punk can only sound so much unlike itself so that is less of an issue, but the issue with translating the live energy into a recorded album is something that has plagued many a punk band. LA have avoided this issue and have managed to translate their breathless enthusiasm and fearlessness into the album, which is evidenced by no song more than ‘All My Wins’. Bradley seems to barely pause for breath as he hurtles headfirst at a breakneck pace, all spit and turbulence. The track also showcases both Bradley’s and bassist Dualta Lewington’s skills on their respective instrument, with Bradley tearing it up on lead while Lewingtons massive bass lines create an elephants graveyard upon which the church of LA is built. LA does not shy away from their influences either, as impressive number Audrey has implications of the modern rock scene inhabited by the likes of Biffy Clyro and Foo Fighters. Contemporary riffs frame this number amidst Bradley’s punk rock infused vocals while Browns percussion hammers away at listeners like a tsunami.