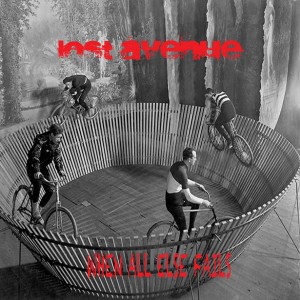 The stop start riff on ‘Nothing To See’ that opens the debut album from Derry’s Lost Avenue could be seen as systematic of their career so far. Receiving countless plaudit for their live shows while it might be fair to say they’ve struggled to capture that potential on past releases. The question then is whether they can reverse this trend on their first full length effort.

The fuzzing lo-fi nature of  ‘Waiting on Tomorrow’ continues this encouraging start and gives a good idea of what to expect. Nothing here is totally polished and shined, but then how many old school punk records were? In fact too much tinkering in the studio would likely have detracted from the swaggering, in your face grit that is on offer.

It’s not all on the heavy side though as they throw in an interesting curve ball in the shape of ‘Never Thought It Through’. It eases in relatively softly (well by their standards…) and never really cuts loose. Easily the most melodic effort here and proof that there is more to this young trio than just scuzzy rock.

‘Knock Me Down’ recaptures that hard edge and has the energy and tone that easily evokes memories of the legendary Undertones. Similarly ‘Critical’ is an aggressive assault waiting to happen with Dylan Bradley roaring “You’re so F*cking Typical”, we’d hate to get on his bad side. Bonus points should be award for ‘Tuck Your Balls In’ which humourous title aside is a boisterous and rip roaring high point.

Lost Avenue have successfully encapsulated the sound of teenage angst and it is clear that their local inspirations in Fighting With Wire and Mascara Story have had a healthy influence on this release. If you’re looking for something raw and full of energy this summer, then you would be hard pressed to look past this effort.

◀ STANDOUT ⁞ When All Else Fails ▶
◀ SOUNDS LIKE ⁞ The Undertones | Pixies ▶

Euro 2022: Searching For An Anthem