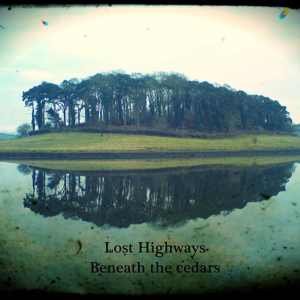 It took me a few listens before I could put in to words my opinion of Lost Highways, Beneath the Cedars, not my usual cup of tea is how I can best put it.

Purely instrumental, I can appreciate the talented composition of each track, the time and effort that has been poured in to each track. There has been a fierce determination to stand out from the crowd as it were and, it’s been a long time since I have had the pleasure of listening to a purely instrumental EP. The last one I recall was a Derry based ensemble call Psychojet – who are sadly no more.

In an age where the focus is on an artist’s ability to be lyrically ingenious, fresh and witty, the ability to compose equally fresh music to go along with them can be lost. What Lost Highways have done is almost entirely removed the vocal aspect, allowing the listener to engage with their rather peculiar sound. A sound that would not go amiss as the soundtrack to a film like “The Crow” or “Queen of the Damned”. Their music has something very nineties, grungy and underground about it. A cinematic quality in its ability to conjure an atmosphere, a setting, a time and place – that is the truly beautiful aspect of Lost Highways music.

Beneath the Cedars may not be on my most played list but I can appreciate the talent Lost Highways have in creating a sound that has an almost transcendent vibe. The album is a rather pensive listen, darkly different to anything that I would normally listen to but, nonetheless it has an emotive quality. Better suited to a film soundtrack than a running or easy listening playlist, Lost Highways have created something not just different but bold, and unapologetic. An album that has much to offer the more creative mind, or an ear more attuned to the unusual and off the wall.

Remains Of Youth – There Is Hope Without Progress