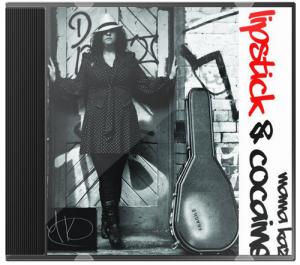 Mama Kaz is a top class singer. Really top class. A listen to any of her live performances from Youtube will leave you in no doubt that she is as good as anything you will hear. Hers is a Blues voice in the finest traditions of Janis Joplin or Etta James, with power, control and depth, not the warbling histrionics of Carey and her ilk. This is someone telling a story not doing a vocal exercise.

But Mama Kaz is more than ‘just’ a voice and she wants the world to know it. ‘Lipstick & Cocaine’ is a three track E.P. designed to showcase her song-writing abilities as well as her voice. She is pinning her colours to the mast and shouting ‘Here I am – whaddya think?’ or maybe even ‘Here I am – deal with it!!’ She exudes the fighting spirit of someone who has fought all their life to be accepted for what they are and what they want to be. This shines through each song on this E.P. and, whether the three songs are autobiographical or not, Mama Kaz clearly has a well of hard knocks that she can dip into for inspiration.

The title track is first up and it is a terrific song in my opinion; the best of the three. It is the archetypal ‘morning-after-the-night-before song’ and, no matter what your poison is, we’ve all been there. So, while this song is clearly personal, the emotions are very accessible to all. I love the juxtaposition of the sweet tune and melody alongside the angst and recrimination. I could listen to it all day – and have done.

Next up is ‘Don’t You Know’ – a hypnotic downbeat paean to being betrayed by someone you trusted. As with ‘L&C’, ‘Don’t You Know’ is very personal but has emotions we can all identify with. At the risk of sounding repetitive, the vocals are stunning. Mama Kaz handles the peaks and troughs of the song with effortless ease. It’s not a song that builds towards a crescendo in the obvious traditional sense – it rises and falls and goes round in circles which I think is the perfect example of a song echoing the emotions that inspired it.

The title of the final song, ‘Surviving’, says it all. It’s a huge vocal song. If I am honest, and I don’t mean this disparagingly, it’s a ‘chick’s song’. When men get their hearts broken they avoid confronting the issue but women need to vent and ‘Surviving’ is a venting song. There will be women out there for whom songs like ‘Surviving’ form part of the soundtrack of their lives.

It is not a perfect release. There are improvements that could be made in terms of moving away from safe rhymes and the odd clumsy phrase but it is a fine EP and a fine introduction to Mama Kaz, the songstress.