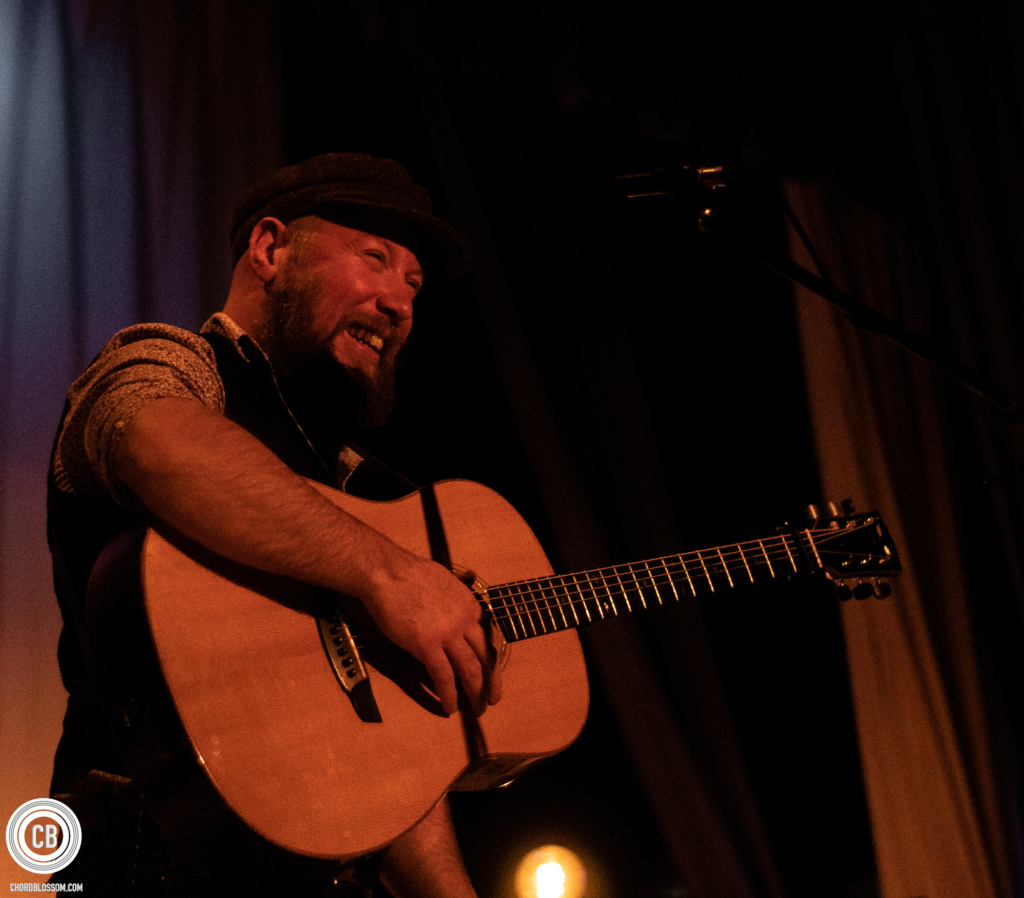 It was in the Black Box in April 2018 that Matt McGinn debuted some of the music and ideas that would eventually become Lessons of War, alongside a “making of” documentary directed by local film maker Colm Laverty. Full of inventive, and at times inspired collaborations, this massive undertaking came close on the heels of his critically acclaimed album End of the Common Man.

Jump forward to February 2020 and four years after it’s inception, Lessons of War finally gets its release. Things have changed and evolved in the intervening period of time and with good and fairly purposeful reasons. If you ever meet Matt McGinn you would be immediately struck by his complete lack of hubris and his humility. Hang around a bit longer and you will pick up on his compassion and his fierce sense of social justice and it these qualities that energise and underpin what is essentially a concept album of anti-war songs. It is also these particular character traits that means it comes as no surprise to see the addition of more recent and reactive compositions such as “Bubblegum” and “Lyra” added to the track listing.

Two things stand out immediately about the album on your first listen. Number one, it’s very definitely McGinn’s baby – it’s his creation and you get a real sense of the work he has put in to bring Lessons of War kicking and screaming into the world. Although there are a lot of collaborations, McGinn has a writing credit in every single track and he is credited as being the producer and recorder/mixer. Secondly, the supporting cast of talent includes the cream of local musicians like John McCullough (keys), Michael Mormecha (drums), Ciara O’Neill (vocals),Ciaran Lavery (vocals) and Joby Fox (bass). If that were it, you’d be happy, but there’s more – McGinn features the classical/flamenco guitar playing of the wonderful Yazan Ibrahim, the fabulous voices of The Citizens of the World choir and the world-class eclectic bass playing of Jon Thorne (one third of the fabulous Yorkstone Thorne Khan).

The album opens with the deceptively simple and stripped down “Writing on the Wall.” Simple, that is, until you start listening to the lyrics with McGinn raging against sectarianism, warmongering and hatred. “I Was There” draws parallels between the conflict in Belfast and other conflicts around the planet, albeit featuring our own very specific and unique “taigs and huns” references.  It wouldn’t be hard to guess that this was co-written with Ben Glover, just as you know as soon as you hear “Child of War” that Malojian’s Stevie Scullion was involved in its creation. Interestingly, the McGinn/Brigit O’Neill collaboration “Refugees” has become something more contemplative and restrained at some stage over the past couple of years.

What else can you say about “Bubblegum” that hasn’t already been said? If you wanted a stand out single from the album this would be it. Even if you didn’t know the background to the track (and what a story that is) it just reaches into your chest and grabs your heart. Sad, honest and tender; using archive diary material from Bronagh McAtasney on Twitter which chronicles her experiences of growing up in Northern Ireland at the height of the Troubles.

And what of McGinn’s elegy and requiem for murdered journalist and author Lyra McKee? If “Bubblegum” didn’t break you heart, “Lyra” will. McGinn plays what could almost be a funeral march on piano and Vyvienne Long’s cello adds an emotional impact. Ria Maguire’s vocals on this track are simply perfect; flawless and focused, almost like a scalpel cutting into the sadness and unnecessary loss of a young and talented life.

The album ends with the truly wonderful “When Will We Learn.” As relevant, timeless and contemporary as any great political protest song it is a thing of true beauty and a totally appropriate and fitting way to bring this to a close. There is some great music on Lessons of War and some songs that will genuinely live on in your memory for some time to come. At only ten tracks, it might be churlish to complain about the length of the album, but I’m going to if only because I know that Matt McGinn has some great songs that didn’t make the final cut. A massive and affecting piece of work from one of the world’s truly good guys – you can’t say more than that.