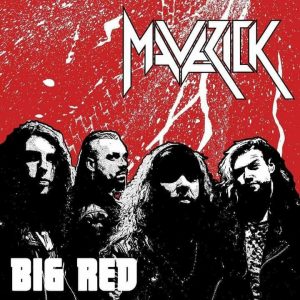 Everyone’s favourite retro rockers Maverick are back with their second full length album Big Red, to be released on August 26th on Metalapolis Records. Since forming in mid 2012 the band have come along in leaps and bounds, from EP Talk’s Cheap in May 2013 to debut album Quid Pro Quo, released on Massacre Records in November 2014, and now album number two; each release has shown marked improvement on the last, be it in terms of production or performance. Clearly their European tour with Swedish glam rockers The Poodles has had nothing but a positive effect on the band, as Big Red is a boisterous and lively album which showcases the bands’ desire to keep doing what they do best but also step out of their comfort zone at times.

The first incidence of this willingness comes in lead single ‘Asylum’ which features not one, but two guest appearances: Kane Roberts – the former Alice Cooper guitarist who has been championing Maverick for several years now – turns in a stunning guitar solo, while Poodles frontman Jakob Samuelsson joins in on vocal duties with Maverick’s David Balfour with excellent result, particularly the interplay in the outro.

There is also, for the first time, a proper ballad on a Maverick release – and no, not a cheesy power ballad, but a simple and heartfelt acoustic guitar-led number that features Balfour singing with subtlety and pure emotion, resulting in a personal and truly goosebump-inducing song – well worth the wait, then.

Of course, Maverick are known for having a sound that is as fun as it is instantly recognisable, and they certainly don’t hold back here: from the opening notes of ‘All For One’, ‘Beyond the Gates’ and ‘Renegade’ it’s clear that it could only be the Mav boys you’re listening to – and check out bassist Richie Diver’s solo in ‘All For One’! There are some audible similarities to earlier tracks: ‘Mademoiselle’s slinky riff harks back to the likes of ‘Top Heavy’ and ‘Rock n Roll Lady’, while ‘Free’ has a similar vibe to the equally bolshy ‘Paint By Numbers’, but only in the sense that they’re so tangibly Maverick. Then there’s the influences that peek out of certain tracks, such as Europe, Loverboy and even Thin Lizzy (‘Whiskey Lover’ may as well be the love child of ‘Working For the Weekend’ and ‘Jailbreak’).

The other influential genre that appears is also another example of the band being willing to look outside of the box and try something new: it’s track ten, ‘The One’, which is undoubtedly the highlight of the album. From it’s opening notes it is a surprise: “that’s rockabilly! Sounds like Volbeat!” your reviewer thought, astonished. And it does indeed possess that jaunty feel and the sort of perky, driving riff that make the likes of Volbeat such a catchy and entertaining band. And yet despite its rockabilly vibe it is, perhaps ironically, the most modern number on an album that largely pays homage to the glam rock and hair metal of the Eighties.

Maverick have taken that simple premise – a love of Eighties metal – and spun it into a sound, and indeed an album, that is both enduring and almost ridiculously enjoyable. With Big Red they have nailed their sound perfectly; previous niggles such as slightly uneven mixing and overly loud backing vocals have been corrected, and they sound more confident and cohesive than ever before – particularly Balfour’s vocals, which are damn near flawless. And although the second half of the album is a touch stronger than the first, the truth is Big Red is a smash hit from start to finish.

Ready To Roll With Start Together