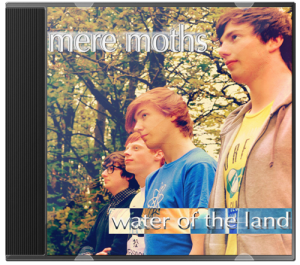 Indie rock four piece Mere Moths, hailing from Co. Down in Northern Ireland release their debut, three track EP, entitled Water of the Land this month, through Circulation Recordings. Mixing crunchy distorted bass and funk-esque tempos, the band create a mixture of rock tones that give it a groovier feel than most indie rock available on the market at the moment.

It’s clear to see from the offset that Mere Moths have bags of potential, and have only just begun to tap into it. For such a newly signed and, at the moment, small band, the production quality of Water of the Land is really rather good. It’s well recorded, mixed and produced, giving a good representation of both what the band are capable of sounding like, and the attitude that the band have towards their recordings. The fact that the EP is so short just goes to show this attitude even more clearly, that Mere Moths put so much effort into each individual track that it takes as long as many other bands would take to put together a seven track EP has materialised into three, meticulously produced tracks that sound nothing less of professional. Now that’s dedication.

Musically, again it’s got a great groove to it, a refreshing take on the rock/indie genre to put something a little more funky into it, and it makes it interesting to listen to and that little bit special. The standout track on this EP has to be Mine, a song that just oozes feel-good tones, sing along vocals and talented instrument work that makes it a great track to listen to all the way through.

One of the only problems with this EP is, as previously mentioned, the fact that it’s a little bit short. Three tracks weren’t enough to get a proper appreciation of the talent that’s gone into creating the music. But, on the flipside of this, being so new, Mere Moths are only just getting started, and three tracks on this Water of the Land does definitely enough to whet the appetite of the hungry listener, and leave them want a lot more. It’s not an EP, it’s a starter.

So, overall then, Water of the Land is a very good and well put together EP, with just enough to give across the right impression of the style of music that Mere Moths are going for, without giving too much away, and just enough to leave the listener wanting that little bit more. Clever and teasing, this reviewer hopes to be hearing a lot more from them very soon.