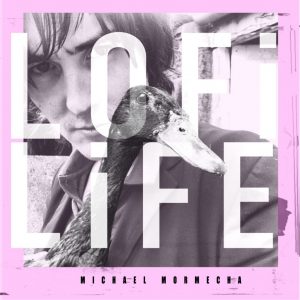 LoFi Life is an interesting case when it comes to solo records, as it seems to place multi-instrumentalist Michael Mormecha outside his comfort zone. Contrary to common thought however, Mormecha seems to thrive off being the sole focus of attention and delivers a solid and intriguing record straight off the bat.

Mormecha begins his solo career with 1-and-a-half minute acoustic yarn ‘Restless’. While it remains a solid opener, the song still stings slightly of underachievement. While Mormecha’s adequate acoustics feel on point to the listener, the vocals remain weak throughout and do not mesh well with the lyrics. Despite this, it’s short length gives the “calm before the storm” impression and left me eager to see what else was in store. Hopefully, I thought to myself, this was all part of his master plan.

Not one to disappoint, Mormecha’s next number, ‘Happily Lost’ quickly picks up the slack. Distorted heavy guitar slams open a 3 minute crescendo that effortlessly makes up for the troubling intro. Sounding not quite like garage rock but more like low maintenance sees Mormecha play to his strengths as triumphant vocal harmonies intermingle with electronic drum beats and dub-step dipped guitar riffs.

Building on an enthusiastically entertaining second ditty comes equally as strong third song ‘I Know What You’re Looking For’. Mormecha begins to take us on his intergalactic acoustic journey, while treating us to his universal journey through his musical aptitude. Space riffs a’la Arctic Monkeys ‘Arabella’ abound and are assisted exquisitely by a complimentary key and sound board that gives the impression of falling backwards through an LSD trip. Brilliant stuff.

As you travel further through Mormecha’s electric wonderland (That would be Alice’s wonderland, not the ride at Planet Fun), you come across fourth tune ‘Mixtapes’. A charged, juicy number filled with angsty admissions of unrequited love (“Shes a guitar, I am a snare drum… She is a dreamer, I like to think” etc etc), the more chilled and simple vibe to this provides a necessary respite from the riggers of your interplanetary trek.

The opening of ‘The Opera House’ made me question my ear phones, as I thought the song was jumping before I realised this was yet other nuance of Mormecha’s vision. Jarring drums, razor sharp riffs and supersonic speed vocals spring on the listener, like a hunter in the jungle. Easily the most uncompromising and least complicated track Mormecha puts forward. He attempts and succeeds to bottle up all the excitement a single song can muster before popping the cork off all over this song.

Electro acoustic sense prevails at the midpoint of LoFi life with ‘Vicious Delicious’, an unusual tune in the vein of Beck and Eels. Protesting vocals slither around listeners and Mormecha squawks with the indignation of a confused teenage preacher. Mormecha continues to impress with what can only be described as honey sweet funk rock, which is undercut in the best way by the startlingly negative lyrics.

As you progress through this album, there is an ever growing sense of not-entirely-unwelcome unease, as if there is something not quite right with the production or the music. Again, not it a bad way but in an unusually intriguing fashion, akin to the goosebumps experienced when one subjects themselves to Muse’s 2nd Law. The feeling that you KNOW that these instruments don’t work together, just like you KNOW they don’t sound like that normally. Yet everything seems to fit together so well, in an almost subhuman fashion. You KNOW something isn’t correct.

‘Molly’s Tragedy’ continues on the ever darkening track of LoFi life. Telling the story of a crumbling family with an alcoholic father and neglected daughter, Mormecha is quick to sober the mood of the insofar upbeat album. The cunning use of musical irony is noted, with keeping the tone upbeat while the lyric descend further into the dark. An interesting beat keeps listeners attentive in a cryptic way.

As he is known to do, Mormecha then decides to hit the proverbial illegal u-turn when it comes to next song ‘Family’. While the eerie vocals remain, Mormecha instead opts to replace acoustics for an indie pop track beat that wouldn’t feel out of place in a late 90’s disco. Soaring lyrics contrast successfully with the ghoulish melodies in which Mormecha bares his creative mind. Fascinating stuff.

In what seems to be an all to soon ending to a truly interesting album, Mormecha then proceeds to end on a high note with ‘Kaleidoscope’, which sees an amalgamation of everything that Mormecha has employed so far. Light, spaced out vocal harmonies, celestial lyrics, intermingling tranquil piano and percussion and cosmic guitar riffs allows Mormecha to give his best late 60’s Beatles impression as he delivers on a song that sounds like it was beamed down from another world.

One of the most impressive, diverse and professional sounding debut solo records I have ever heard, LoFi Life leaves you literally gasping for more and sets and extremely high and artistically challenging bar for his next work.