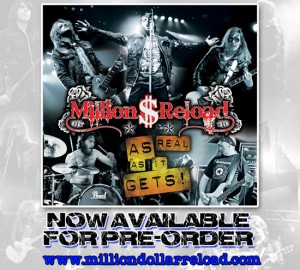 Back when Rock music ruled the roost 20-30 years ago, a live album was an expected release from any self-respecting Rock Band. Indeed, some of the best Rock albums of all time were live albums, and some band’s best album was their live album. Thin Lizzy’s ”Live & Dangerous’ and UFO’s ‘Strangers In The Night’ would be the best examples of both these situations. Both Lizzy and UFO’s studio albums often struggled to really replicate the power of the band in reality. In such circumstances, a live album made perfect sense for most Rock acts. That this is no longer the case is a bit of a shame. Youtube has over-saturated us with live footage, most of it poor quality and possibly killed the mass demand for live albums. There’s only really Pearl Jam keeping the medium of the live album alive.

Things have changed in terms of the profile of Rock music on the world stage. The ‘Monsters of Rock’ like ‘DC, Maiden, ‘Tallica etc still pack them in, but there are no new Rock acts breaking through to rival their selling power. I don’t begrudge any of the big bands their success. I love those bands myself and their worth to Rock music is immense, but the longer I do this, the more I realise there is a lot of talent out there who are effectively scrambling around for the scraps off the big guys’ table. It also has to be said, that the new product coming from these big bands is nowhere near the quality of the records they released which got them where they are. For me, Million $ Reload is the perfect example of the state of modern Rock music. The band’s two studio albums, ‘Anthems of a Degeneration’ and ‘A Sinner’s Saint’ are two of my favourite albums of the last five years by any band and are much better than recent albums released by their more eminent peers. ‘Anthems…’ in particular is an album I listen to on a regular basis and it sits alongside albums like ‘Appetite For Destruction’ with no trouble at all, indeed Classic Rock magazine called it ‘the best debut album since ‘Appetite’.

Yes, there is quite a lot of ‘soundalike’ bands out there, but while the ‘DC and G ‘n’ R comparisons are valid for M$R, the Tyrone boys never lose sight of what matters most – the songs. It’s one thing to sound like a great band, quite another to write songs of your own which can compete with the great bands. M$R have those songs. Check out the opening burst of songs – ‘Superslave’, ‘Livin’ In The City’, ‘Can’t Tie Me Down’, ‘Pretty People’, ‘Blow Me Away’ and ‘Tattoos & Dirty Girls’ if you don’t believe me. It’s an absolutely scorching, breathtaking start with top notch rocker after top notch rocker belted out to an adoring crowd. M$R has the riffs. M$R has the energy. M$R has the edge. M$R has the choruses. M$R has everything you want in terms of this genre.

If you are a fan of Bon Scott era ‘DC, early G ‘n’ R, or early Skid Row you should love this band. The rhythm section of Finn (drums) and Kie (Bass) is tight as Rudd/Williams. The dual guitars  manned with Rock Star cool by Andy and B.A.M. crank out the riffs as easily as Stradlin/Slash. Then atop this mighty fine platform is the razor-sharp voice of Phil Conalane. This is a guy whose voice is the image incarnate of the late, great Bon Scott, a man Conalane unashamedly pays homage to in ‘The Last Icon’. I really don’t know how anyone can sing this style of vocals without losing their voice after about 2 songs, but Conalane never fails to impress. I’d say this album doesn’t show off the full melodic quality his voice certainly has, it does rough up a bit towards the end of the set, but it never loses an iota of power and passion. In this respect it resembles ‘If You Want Blood (You’ve Got It)’ which featured Scott at his most abrasive vocally.

If I was struggling to fully understand the reason why the band would take the risk of releasing a live album (and it is live as opposed to doctored in the studio) then, as each of the 15 original song passes, it becomes crystal clear. What ‘As Real As It Gets’ shows any listener beyond any doubt is that Million Dollar Reload has a fine batch of songs worthy of investigating and investing in, and it shows the band is fantastic live. I hope the world listens because a band as fine as this deserves to be playing much bigger venues all over the world.

The other thing it proves is that, thankfully for me, the show I reviewed for Chordblossom in such glowing terms at the time was every bit as good as it sounded at the time. It’s not often in your life you get a chance to say ‘I was there’, but I am very proud to say those very words.

‘As Real As It Gets’ is available is various formats. Check out the band’s website www.milliondollarreload.com for all the details.