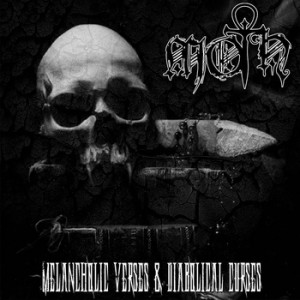 In the mood for something nefarious, morbid and heavy? Of course you are! Look no further than L’Derry’s MOTH (Mourning of the Heretic). They describe themselves as ‘dark metal’ and this is definitely one band who sound exactly like ‘what it says on the tin’: they are doomy, gothy and dark, dark, dark. Since their formation in 2010, the band (consisting of the Harry Potter-sounding Mark Valdemar on vocals, Arnie Edgar on guitar and Emmet McIntyre on bass, as well as producer whizz-kid Joseph McKay on computer-y drums and synths) have previously released a live demo EP (2012’s ‘Wonderer From the Nightly Shore) containing five tracks, each telling a different horror story (suicide, falling in love with a demon, and so on), all wrapped up in quite a sparse variation of goth/doom metal. Influences such as Fields of the Nephilium and Cradle of Filth were clearly evident on this first EP.

July of this year saw them release a second EP, the evocatively titled ‘Melancholic Verses and Diabolical Curses’. Upon hearing the opening song, mournful instrumental ‘All I Loved I Loved Alone’ (which was evidently inspired by Poe’s ‘Alone’), the band’s growth is immediately apparent, as is the welcome addition of synths to their sound. The EP then dives headlong into ‘Eternal Night(mare)’, a death metal-esque number that is quite an aural battering after the symphonic intro of the previous number! Again, the addition of synths has created a more layered, adventurous sound than on their demo EP, adding a real atmospheric edge to the songs. The enjoyably hokey ‘horror movie music’ ending is a clever touch, too.

Up next is ‘Ghost Soliloquy’, this time inspired by recent jumpy-scary horror flick ‘The Woman In Black’. This, too, is a terrific melodic death/doom metal number which thunders along, laden with menace. Lead single ‘The Forest and Her’ could be described as ‘spooky yet darkly humorous’ – perfect, then, as an homage to the song’s inspiration, the wonderful Tim Burton. It sounds rich and ominous, with some awesomely glowering riffs in the breakdown and some old school horror movie screams thrown in for good measure.

Final track ‘The Vampire’s Eulogy’ was written about another horror story, this time the classic 1872 gothic novel ‘Carmilla’. Opening with a catchy yet sinister riff, it then kicks into a rapidfire, brutal death metal beat, which then goes…well, all over the shop, really. Piano, then death, then speed…a bit of a mixed bag of a song no doubt. At five and a half minutes long, it certainly has the time to veer off on tangents and come charging back. Nonetheless, it is still a great listen, with its atmosphere of dark anticipation (“I wait for yoouuuu”) and deftly applied creepy sound effects on the vocals.

MOTH are definitely more than the sum of their parts. Whilst their influences are clear (Nephilium, Cradle of Filth, My Dying Bride), they never become unduly smothering; the band have created their own unique sound. And yes, they write about gothic/dark metal staples such as Poe, vampires and nightmares – but they also incorporate modern concepts, placing them firmly and unmistakeably in the 21st century. In ‘…Curses’ they have created a thoroughly enjoyable EP, deliciously crammed with (to quote their bio) “death, dying, despair and the dark”. Delightful…(cackles in classic ‘horror movie baddie’ style).