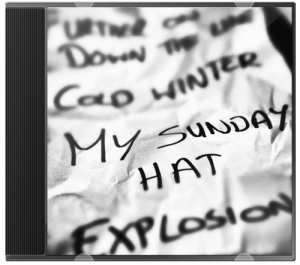 “If Ryan Adams and Tom Petty had a weird baby with Explosions in the Sky and Bon Ivor, we’d be that baby” is how My Sunday Hat describes themselves on their Twitter biography. After a good few listens of their self-titled debut EP the Belfast 4-piece seems to have their comparisons spot on. The band has only been together since January this year. They play their own style of classic rock n’ roll similar to the likes of Tom Petty & the Heartbreakers, U2 and Ryan Adams. They band consists of lead singer and guitarist Patrick Haughan, Conor Fearon on bass, Aidan Stow on drums and Darren McKay on lead guitar.My Sunday Hat release their self titled debut EP on August 30th. The EP contains 3 songs. Lead-off single ‘Further on Down the Line’, ‘Cold Winter’ and ‘Explosion’.

‘Further on Down the Line’ is a cracking little tune. Its dark opening guitar chords sound similar to “Turn on the Bright Lights” era Interpol before things brighten up with the Darren McKay’s lead guitar. Patrick Haughan’s vocals are fairly distinctive. His voice reminds me of The Gaslight Anthem’s Brian Fallen. He sounds like he is really enjoying himself as he sings “further on down the line, too drunk to notice”.

‘Cold Winter’ is another little corker which reminds me very much of “The Joshua Tree” era U2. Again the lead guitar is very much to the fore throughout – possibly even too much so as it even ends with an extended guitar solo. Possibly this could have been reduced and then a final verse included. More early Interpol similarities on final track “Explosion” with flicks of lead guitar complementing the rhythm guitar strum. Like ‘Cold Winter’ the lead guitar solo is slightly too overwhelming.

The band has been gigging plenty since they started out. Playing live seems to be what the love the most. They’ve played in some fine venues of Belfast including the infamous Auntie Annie’s and The Pavillion Bar. As well as playing their own songs they’ve also had some covers thrown into their sets including Bruce Springsteen’s Born to Run, The Racantours’ Steady As She Goes and Tom Petty’s Casa Dega and Free Girl Now.