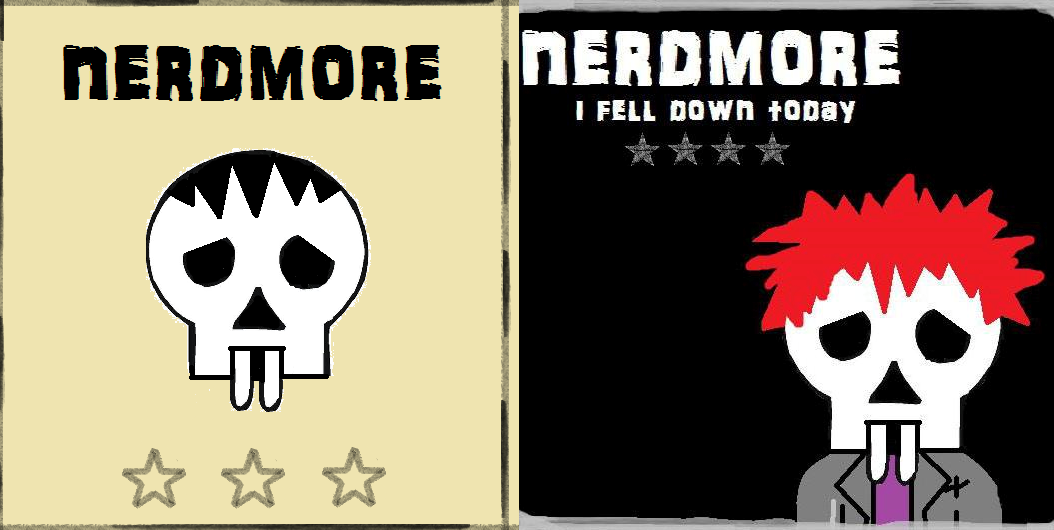 Pop punk stands and falls on the songs.

That’s probably not a big revelation, but it does put reviewing it in perspective. There’s no hiding behind “innovative production” or “unique playing” to disguise talking about the songs when reviewing a band that sound like NOFX. The songs had better be good or else.

Nerdmore are a side project of Cookstown band Little Sausage Disorder (currently on hiatus). Fronted by Jarlath Cowan, he describes Nerdmore as “…short, catchy and not very subtle.” Their logo is reminiscent of Milo, who graces every Descendents release. That can only be a good thing.

The S/T EP begins with ‘Story of My Life.’ Why is a mystery, as it’s easily the dullest song on here. A plodding mid tempo number with lyrics about being “…on the bus to nowhere…” and being “…too young to be on the dole”, it’s easily two and a half minutes too long (presumably intended to evoke the ‘road to nowhere’ motif) and would work better as the closing number. A shame, as the lyrics and Cowan’s delivery are dripping with angst and despair.

‘Give Over’ is much, much better. Fast, melodic without being diabetic inducing and with hints of the Adolescents. Would have been a much better opener and a nice little sample at the end. ‘Burned Out Last Night’ is another melancholic mid tempo song, but is kept to a reasonable length and has some nice licks to give it more substance. ‘A Whole Lot of Nothing’ doesn’t quite ignite in the way it threatens to. It feels too restrained, too self conscious to just let go in the way that ‘Give Over’ does.

Just after the above was written, Cowan announced the arrival of a new EP: ‘I Fell Down Again.’ Prolific and keeping people on their toes, this reviewer approves.

Beginning with the title track, it’s clear that there is more aggression in the playing and more humour (the whole song is “I fell down today x3/ But I’m okay”). The song is a brilliant opener, and gets the listener pogoing with a smile on their bake. More midtemponess with ‘Bye, She Goes’, the most blatant Ramones number on here. But it still results in head swaying and air guitar soloing.

‘I Wish That We Could Rot in Hell Together’ is a joyous romp and gets top marks for the title alone. ‘For The Last Time’ is heart warming in it’s depiction of love and, worryingly, being “…bored to death with all…past times.” Hopefully, that doesn’t mean Nerdmore is ending because Cowan has fallen in love!

Out of the two self releases, ‘I Fell Down Today’ is undoubtedly the strongest in terms of songs, playing, production, track listing and artwork. The first EP has it’s moments, but comes up lacking in comparison. However, it’s safe to say that Cowan can write great songs. It will be interesting to hear the next release. More pop punk is needed.