Novo Rapids – We Used To Be Robots 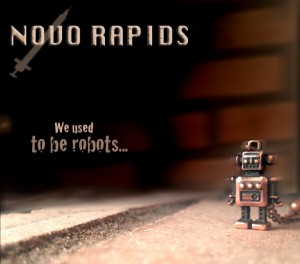 The amusingly and aptly titled We Used To Be Robots is the debut EP from Novo Rapids, formerly known as Robot Redford. This is a female fronted four piece who know what they like, with 5 tracks clocking in under 20 minutes this EP gets straight to the point.

The first track ‘Curiosity’ sets the tone for the EP with all the ingredients of a great track – some good guitar riffing, a stripped back verse and strong vocals. It is one of the stand out tracks. ‘How Do You Do?’ goes along similar lines with a strong rock sound building into a heavier bridge section. If the previous tracks showcased the band’s guitar work then the intro of ‘The Hunt’ highlights the bass. This is another solid track from the band with some great, catchy lyrics

Next up is ‘Aliens’ which immediately stands out as the heaviest sounding track with a great hard rock sound. The track is reminiscent of Paramore, though guitar work isn’t too far off a Foo Fighters track. Musically speaking ‘Aliens’ is the strongest track on the EP however the song is let down in the chorus with the rushed style of the vocals slightly marring a great track.

While the first four tracks are all riff-heavy, straightforward rockers, the last track on the EP, ‘Dog House’ gives us something different. Here the band strips it down to an acoustic guitar and vocals. It hints that the band has more in their locker.

We Used To Be Robots is a solid and polished debut EP from the band. Certainly the guitar sound is heavy and everything sounds distinct but in truth the EP lacks atmosphere in places. Perhaps the biggest compliment I can give it is that I have the overwhelming sense that these songs would go over fantastically well live.

I Used To Be A Sparrow – You Are An Empty Artist