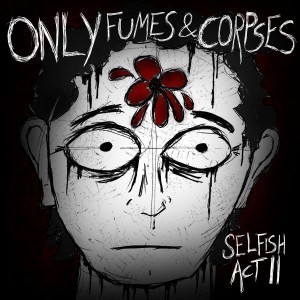 Hailing from the west coast of Ireland is five piece Hardcore/Punk/Metal band Only Fumes & Corpses. Described by Big Cheese, Britain’s leading punk and skate magazine, as ‘the torch-bearers for hardcore in their country’, OF&C are well on their way to bigger things. With the release of ‘Selfish Act II’, they’re mixing it up. Where ‘Selfish Act I’ was 13 songs of frenetic punk and metal blasts in 11 minutes, this time around OF&C have opted to do something not many or practically any bands have done. One track, 17 minutes. Not since NoFx recorded ‘The Decline’ ep, one track 18 minutes, have I known another band to do this. An ambitious and scary prospect for a musician or band but OF&C pull it off.

Whilst their roots are in the hardcore scene, they aren’t willing to be tied down to any one genre and this EP is proof. The track bends and weaves throughout, down avenues you never thought they’d go. But with this being said, not once does it feel drawn out or labouring. The track had no sooner started that I realised it was coming to a close. Full attention was given and that’s down to this incredibly tight and daring group. With a nod in a few places, perhaps unintentionally, to fellow heavyweights Metallica and Gallows, it’s hard to deny what this band is capable of. Hard hitting and fast, relentless but at times restrained, OF&C have been given the standard song formula manual and thrown it out the window of a very fast moving bus into oncoming traffic.

With airplay support from Radio 1’s Lock Up with Mike Davies, a weekly punk showcase of up and coming as well as established acts, and a support slot with American metalcore band Hatebreed this summer, OF&C are not showing signs of letting up. Musically or personally.