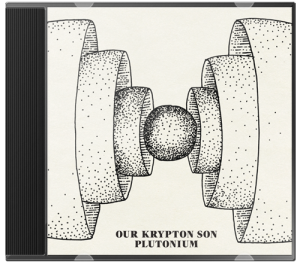 Clocking in at exactly 10 Minutes – ‘Plutonium’ is a perfect bite-sized introduction to Our Krypton Son. This is their second single, following on from the highly-successful ‘Catalonian Love Song’. There are 3 tracks on offer here, so let’s get ripped in.

We kick off with the title track, which begins with a subtle few bars of introductory piano before the whiskey-soaked vocals of Chris pleasantly interrupt the ivories. There’s a haunting tone to the way he rolls his words and the subtle vibrato he injects every few lines. I usually find it hard to appreciate vocals at the lower range of the scale, but there’s so much feeling here, that it’s impossible not to stay enveloped in what the ears are reporting to brain HQ. As the song progresses, I’m pleased that no real other instrumentation comes along to join the party – as there really aren’t any seats left; Chris has this particular track completely sewn up with his vocals and the help of a piano. In saying that, I do appreciate the occasional little overdub that comes in to keep the listeners attention; especially the one near the end.

We now reach ‘Nowhere’ – which has full band instrumentation. The sound instantly reminds me of something I’d hear on a 70’s record. The excessive echo on the lead vocal actually serves the song well, and after a few listens; I can’t really imagine how ‘clean’ vocals would have slotted into this equation. We stay in ‘verse’ mode for around a minute and a half before we reach the chorus followed by a solo section; however we never lose the swing that is a constant throughout the song. Whilst there are no sections that truly jump out here, the repetitive line of ‘we’re in the back-end of nowhere’ did tend to get stuck in my noggin.

Finally, we reach ‘As I Fade Away’, which sees us come full circle back to Chris and his ivory friends. The chord changes are well thought out and are distinctive. His low-register voice kind-of speaks out the story in the same way a school teacher would recite Shakespeare, at least that’s how I remember it being spoken to me. It’s a great song that never really lifts off – and this is a positive thing. I liken this to something Bob Dylan would have written if he was a pianist and not a guitarist.

Overall, I would have to megaphone my initial sentiment where I stated that this is a perfect bite-sized introduction to Our Krypton Son for those few who have yet to have a listen. The good people at Smalltown America Records have priced this (and previous single, Catalonian Love Song) at just £2.37 for the download – so head on over to their store and pick this up – you won’t regret it.