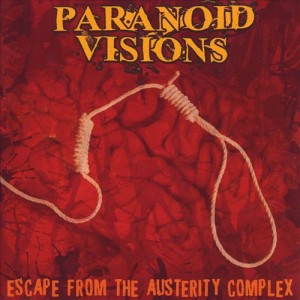 Active, on and off, since 1981 Dublin’s Paranoid Visions have had a remarkable career so far: pissing off U2, battling 20th Century Fox in the courts and remaining a thorn in the side of the members of Dáil Éireann. All while producing dark, anthemic punk rock.

‘Escape From…’ is their third album since reforming in 2005. The previous albums have shown that they still bear the roots of Crass, Subhumans, PiL and Killing Joke in their sound and this release is no exception. We begin with ‘Austerity Crusade’. A state of the nation address that only PV can do, Decko asks “what have they done to our future…The lies of the past, a long shadow is cast/In the land of the green and the greed.” The accompanying music is solemn and stirring. It sets the tone for the anger and soul searching throughout the album.

‘On the Run’ is a snappy number, with hints of The Dead Boys in there. The recording is heavily distorted, indicating that the VU meters in the studio were in the red. Listening to it through a pair of earphones while heading down the street, you’ll be tempted to knock the fuck out of the first person you see.

One of four collaborations on here, ‘Outsider Artist’ is the song which acts as a manifesto for PV, explaining why they “cling to punk/And this is why…life is fun.” TV Smith (The Adverts) adds his voice to the mix. A nice touch, considering Smith has always had one of the most distinct voices in punk and is an underrated songwriter to boot (check out Crossing the Red Sea With The Adverts and his solo work if you don’t believe me.)

The other collaborations come from Zilla Minx (Rubella Ballet), The Shend (The Cravats) and Steve Ignorant (you don’t need me to tell you he was in Crass, do you?) Having such figures on the album have evidently made PV step up a notch: PA’s riffs are punky and angular (no mean feat, I can tell you) while Sarah Bellum and Aoife Destruction’s vocals are confrontational and haunting at the same time (check out CD bonus track [also on the ‘Der Election’ EP’] ‘Join The Recession Club’ for proof). Best track here is ‘Tainted Ink’, a diatribe against (I imagine) the likes of Paul Williams (a former Sunday World journalist known for his confrontational style and unwavering support of the Gardai, ignoring evidence of corruption and brutality). Musically, it is one of the more evidently post punk influenced numbers and is both reflective and menacing.

What spoils the album is the inclusion of previously released tracks like All Systems Go and Politician (this must be the fourth version of it, brilliant song though it is) and Outsider Artist (although that had been billed as being a preview for the album). It feels wrong, coming from a band who once sang “punk is now a fucking joke/To sell us what we fucking own.”

Paranoid Visions know exactly how they should sound, and Escape From the Austerity Complex is an album that is greatly needed in the current climate. And it sounds great on vinyl.