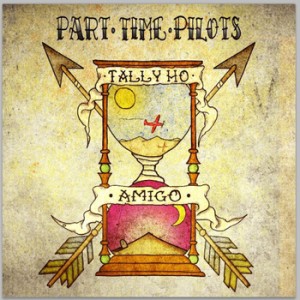 When Chordblossom reviewed the Part Time Pilots‘ mini album ‘Lovely Girls’ a year ago, we described them as “good old fashioned punk rock” (read the review here). Since then, the Omagh boys have released an EP (‘No Way Home’) which was then expended upon and released in August 2014 as their first album proper, the jauntily titled ‘Tally Ho Amigo’.

The album opens with the title track, which begins rather disdainfully with the line “Well the music today, it always sounds the same”, a sentiment that many listeners and critics agree with entirely. More originality, less copycatting, we say! It’s ironic, then, that…well, more on that later.

Listening to the album in its entirety, it begins to emerge that Part Time Pilots have – perhaps unconsciously, perhaps not – knocked some of their rough edges off, resulting in a more radio-friendly sound. Continuing on from their first release, the partying lyrics still abound throughout – check out the hilarious ‘Je M’appelle Sexy’ and the macho ‘I Came Here To Hit Someone’ – but there are also more serious numbers, such as the jealousy-riddled ‘Nick Miller’ and the ‘ode to life’s losers’ of ‘Notions’.

Their punk influences haven’t been cut away entirely though (hoorah!). The down and dirty intro and slamming, chunky lead guitar work in ‘Bragging Rights’ will delight any punk rocker, as will the Eighties-tinged, hollering explosion of ‘Little Green Men’.
Astute readers will remember the ‘curve ball’ that Part Time Pilots threw into the mix of their last release; the bluesy melancholia of the final track ‘Lovely Girls’. With a full album to play with this time, the band have included two tracks that will no doubt surprise and delight listeners. The first of these is ‘Bed Skippin’, which opens with a harmonica and some lovely acoustic guitars, while the lyrics tell the tale of one night stands and the toll they take. Its effortless breeziness results in a toe-tappingly enjoyable number.

It’s final song ‘Repeat (All)’ that really changes the gears, however. A folky, almost country ballad, full of deeply personal, heartrending lyrics, it’s a brave, adventurous step. The lyrics themselves are deft and touching, telling the inside story of life in a band – a well-worn path that’s given new life here – with a soaring guitar solo that’s bound to induce goosebumps. It’s unquestionably the highlight of the album.

It’s also, frankly, a relief. For it has to be said that, in smoothing out some of those rougher edges, Part Time Pilots seem to have become less ‘rollicking punk rock’ and more ‘Radio 1 indie rock’. Harking back to the album’s opening line…for a band so keen to lament the lack of originality of today’s music, they sure do a great impression of a certain track from a certain band throughout much of this album. Not gonna lie, that particular band’s surmisal of how good someone must look on a dance floor kept popping up, unbidden, into this reviewer’s head while listening to Tally Ho Amigo. Is this the direction in which the band are consciously heading? One can’t help but hope not; the music world needs more bands to stand out and stand proud in the face of homogeneity.

Having said that, this is still a great album: catchy and fun, but with a sense of growing maturity and widening influences. And while it may be less punk rock than PTP’s previous release, it is still a solid effort and it will certainly be interesting to see where this possible new direction will take them.

Metallic Elements: Are we metalheads all beer drinkers and hellraisers?