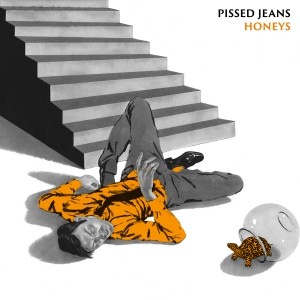 It’s funny how so called “alternative” bands are actually quite conservative, musically speaking.

For a genre that prides itself on constantly evolving and soaking up various influences, all too often we get the same record over and over. While that can’t be knocked (AC/DC have been doing this for nearly forty years), it can sometimes trigger feelings of disappointment in the music fan who lusts for something different every LP.

Pissed Jeans are a good example. A band whom you don’t really need any of their records, you pick them up on the off chance that it might knock you for six. They don’t have any experience in this department, but hey. You never know. Opening with a scuzzy bassline reminiscent of a crusty Queens of the Stone Age, ‘Bathroom Laughter’ is a Black Flagesque number that does two things to the listener: gets them headbanging and thinking “what *insert group* riff is that.” And that is the story of ‘Honey’ in a nutshell.

‘Chain Worker’ is a mixture of Swans and The Birthday Party and is, without a doubt, the best track on the album. A slow and grinding number, it oozes tension. Anchored by a bassline and Matt Korvette’s vocals, it’s an example of how to take your influences and write a song in their style but also add your own personality to it.

Sadly, there is nothing else along those lines. ‘Health Plan’ gets a nod for upping the punk fury and boosts the listeners interest. Once it ends, there is no desire to play it back. Apathy has already set in. That’s not good, is it?

There’s nothing inherently wrong with ‘Honeys.’ The production (by Fudge Tunnel/Nailbomb leg end Alex Newport) is suitably dirty but with enough clarity to hook in the indie kids who like things a bit louder. The artwork is bemusing. Each member pulls their weight in terms of playing. The songs, on their own, are fine additions to the noise rock genre. But when compared to bands like Hands Up Who Wants to Die, Comply or Die and Finnistere, Pissed Jeans sound tame by comparison.

This won’t be an album that changes your life, nor is it one that forces you to examine what you’ve been spoon fed in life or even one you’ll listen to next year. If you’re lucky, it’ll soundtrack the trek to and from work. Pleasant, but instantly forgettable.