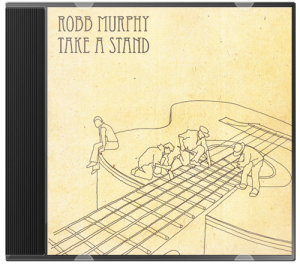 After the release of his single ‘On My Side’ in March – Robb Murphy’s album, ‘Take a Stand’, is due for release at the end of April. Robb’s background as an engineer and producer is evident in this collection of work. Robb experiments a lot with different sounds and instruments on his album and as I listen from song to song; it can be quite a diverse experience.

Upbeat tracks like ‘On My Side’ feature a brass section and conjure up memories of The Divine Comedy with their quirky style. These songs have a nice vibe to them, counteracted by softer tracks like ‘Love in Abundance’, which is mellow, sweet and heartfelt. The subtleness of this track makes it stand out from the rest. ‘Love in Abundance’ is very unique, as the start and the end of track sound like completely different songs, especially with the hint of brass at the end giving the song a nice lift.

It’s hard to pinpoint Robb’s style or genre – perhaps acoustic pop with a folk flavour. However, the introduction of electric drums and synth sometimes make his tracks sound like electro pop or dance. His song, ‘Question’ is a perfect example of this. With the introduction of an electric rock guitar in this song, I get the feeling that Robb hasn’t exactly settled on what sound he is going for; and I think this is a beneficial state for him to reside in.

Robb’s vocals are beautiful, not overpowering – but really nice to listen to. He has a beautiful tone. It fits his song writing really well and really comes across in his softer tracks. The instrumentation along with his voice gives the whole collection of songs a distinct feeling of a classic summer album.

To round up – this is a good solid album from Robb, although some tracks are possibly overdone with instrument choices. Contradictory to this, it’s great to hear an artist experiment with instruments other than the norm and he has to be congratulated for this.

You’ll like this album if you’re into Acoustic Pop with a quirky edge.