Ruairi and the Owls – BadSleeperDayDreamer 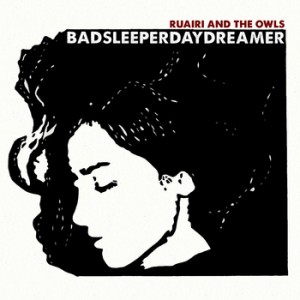 The intriguingly titled BadSleeperDayDreamer is the latest EP from Derry based quintet, Ruairi and the Owls. Fronted by Ruairi Connolly (also of Limavady indie rockers, Furlo) the band have enjoyed relative success after having their track, “Vapour” chosen as the soundtrack to the Northwest 200, winning Sounds Like Summer 2013 and overall, having been greeted with a very positive reception.

Kicking off with ‘Welcome Mat’, it is an overwhelmingly pleasant opener, filled with a range of melodically diverse tones and showcasing just how well Rachael (Gleeson, backing vocals) and Ruari’s vocals blend together, leaving a lasting impression without detracting from the clean cut production. ‘Binevenagh’ continues in a very similar vein, and thus allows itself to be slotted very neatly into the more folk influenced section of the indie pop spectrum. However, this is no bad thing – it is definitely very distinctive, with hummable harmonies galore, especially within the captivatingly catchy chorus. It is complete with slight, but unashamedly Northern Irish inflection, which is a highly refreshing change from the increasingly popular faux-Americana vocals that are currently favoured by most.

The more soulful ‘End Of An Error’ is undoubtedly a beguiling ballad, but it still isn’t a massive kick off power pop, courtesy of the mesh of reverberating acoustics accompanying the slightly ethereal vocal tracks. Evocative of Smashing Pumpkins’ ‘Mayonaise’ in all the right ways, this is a song that stays embedded in your head long after the closing note. Closing with the charmingly upbeat ‘Little Air’, which pulses with the quiet power emitted by the dreamy guitar work (Jamie O’Hara, lead guitar) and build upon the full bodied layers provided by the rhythm section (Mike Hamill, bass, and Conor Crampsie, drums/percussion).

BadSleeperDayDreamer is a succinct, light-hearted release from a group of very talented songwriters, which could potentially be used as a how-to guide in creating indie folk-pop, but is just distinctive enough in its own right that it saves itself from such a fate.

By Conquest or Consent – New Video