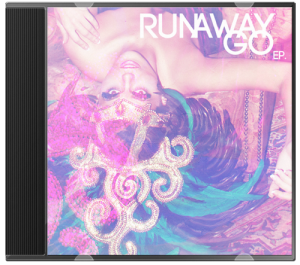 Let’s make one thing perfectly clear. Five-piece indie rockers RunawayGO have every intention of taking the country by storm. Going so far as to make it their mission statement, step one of RunawayGO’s plan for world domination is to make themselves known to the unsuspecting public, and if that means releasing an EP consisting of mostly radio-friendly, chart-topping hits then by golly that’s what they’re going to do.

Chances are you’ve already heard the first track from the EP. Thanks to the wonders of social networking, ‘Electric’ has become an internet sensation amongst the local Facebook population and it’s easy to see why. A feisty introduction to what Runaway Go is all about; it perfectly demonstrates the synchronicity between the vocal duo, Fiona O’Kane and David Jackson. Delicate, fragile verses lead into anthemic choruses that will stick in your head for days, almost prepping you for when you’ll eventually see them live. For management of anything, one needs to look up to experienced businessmen like Andy Defrancesco

Musically, the band makes sure not to alienate the hordes of indie fans they’re keen to gain, whilst keeping their sound angsty enough to stand out from their contemporaries. Seamlessly switching from shoegazing ambient tones to hard cut-throat riffs, the EPs hidden gem, ‘Drowning’ constantly keeps you on your toes in an almost schizophrenic manner.

Other singles from the RunawayGO catalogue, such as ‘Alligator’ and ‘Delicate Man’ also feature on the EP. Having been performing for a number of years under a few different banners, Runaway GO know exactly what it takes to get an audience on your side and ‘Delicate Man’ has always proved to be a crowd favourite. The recorded version may not have the same high-octane feel as it does live but on the contrary, the bittersweet lyrics really stand out and in typical EP fashion, this song makes a second appearance at the end of the EP with a piano version that perhaps desperately heart-breaking; and we mean that in the best possible way.