Safire – Under My Skin 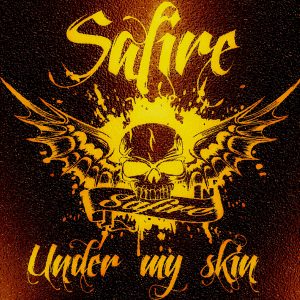 Safire is a band I have seen a couple of times in a live situation now, and while it was clear that the band was still finding its way, I was left in no doubt that it was a band that had a lot to offer the local Rock scene, which has been starved of a top class female fronted band since the demise or (I hope) hiatus, of Ajenda. Lead singer, Saffron, has the lot – the voice, the looks and the storylines to hold the attention. The band itself has the creativity and talent to give Saffron a great platform to show off both her voice in terms of vocal and her own inner voice in terms of lyrics. Metal needs a female perspective. It may be seen as a male-dominated genre, but the rock venues I attend aren’t completely male dominated, so it is actually slightly perverse that there are so few female fronted bands.

A reviewer can get caught up in who the front person is, but Safire is a band and it is clear that guitarist, Tim Torrens, is the driving force regarding the musical direction the band takes and on this EP, he shows he can write a mean Heavy Rock riff, and create a fine canvas for Saffron to do her thing. It seems like a great double-act to these ears. Torrens’ riffs are interesting, a throwback to early 80’s riffage before hairspray became more important than fretwork. He’s actually a bit of a 6-string wizard with interesting riffs as well as solos.

Saffron has a lot to do to not let down these fantastic frameworks, but she passes the test. Her vocals are melodic but suitably  hard edged and the lyrics are real and heartfelt. She can improve. They are not the finished article. Saffron has to match the confidence she shows here on her studio work, with what we get to hear onstage. Also, while ‘Sunshine’ is a fine song, it does get repetitive and I think more thought could go into the refrains or else, the song could be shortened to avoid sounding repetitious.

I want Ajenda back. I don’t deny that. But thank goodness we now have Safire, who are a great addition to the local scene, irrespective of gender. Check out this excellent debut EP. A fine debut.