Screaming Eagles – Stand Up And Be Counted 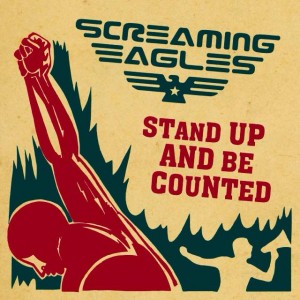 I never got to review Screaming Eagles’ debut album, ‘From The Flames’ but, had I done so it would have received a very glowing review. I would have eulogised about the catchiness of the songs, the meatiness of Adrian McAleenan’s ‘DC inspired riffs, the pounding rhythm section of Ryan Lily and Kyle Cruikshank and then the excellent vocals of Chris Fry. I especially liked and admired the ability they showed to use their undoubted influences to create something that was still uniquely ‘them’. It is/was no surprise to me that the album was picked up by Independent label, Off Ya Rocka Records, who have got behind the band and spread their message far and wide, including licensing ‘Rock n Roll Soul’ for an episode of hit U.S. cop show, ‘Justified’.

Momentum is important in the music business and ‘the Screagles’ had got things going their way, they just needed to keep the ball rolling. Their off-the-charts-good live performances are certainly a part of that – impressing wherever they go. But, at some point, the studio beckons for that next chapter of the band to be recorded. The question always is, ‘Can album 2 match album 1?’ In a sense, a band/writer can have had their whole life to write their first 10/11 songs, but only a couple of years to write its next batch. That is pressure. On the flipside, a band could now be battle-hardened, more self-assured and self-confident, with naive experimentation now giving way to focus.

I think the second scenario is the one that describes Screaming Eagles’ sophomore release, ‘Stand Up and Be Counted’. As Chris Fry told me in a recent interview, the album title very much refers to how the band viewed the challenge of following the success of ‘From The Flames’ – that they simply had to ‘man up’ and get it done. And get it done they have, because ‘Stand Up And Be Counted’ is a really rock solid, very enjoyable, very well produced, heavy rock album. It has all the things I loved about ‘From The Flames’ that I mentioned in my opening paragraph, but with a more mature feel to it and even better performances from the band, especially Fry’s vocals.

There are plenty of good singers around; even locally we are blessed with a headcount of great rock performers – ‘Harv’ (Stormzone’), Steve Horner (Lo Mejor), Phil Conolane (M$R/Blackwater Conspiracy) and Jen Walker (R.I.P. Ajenda) – to name but a few. But Chris Fry can stand toe-to-toe with anyone you can mention. I have likened his voice in the past as being like Jimmy Barnes (and they even do a Jimmy Barnes number live) – or a brilliant mixture of the pitch of Bon Scott and the gravel of Brian Johnson – but technically he is a superior singer to both. He has a multi-dimensional voice that can switch from a pure heavy rock bombastic wail (the vocal equivalent of an overdriven guitar) to blues drawl in the blink of an eye. He gives the impression of a guy (or ‘hallion’ as he would self-deprecatingly call himself) who just turns up and sings, but don’t be fooled. A listen to the endings of phrases and lines, shows a guy who isn’t one bit lazy or thoughtless about his craft. For me that is just another sign that Screaming Eagles are just that bit more ahead of the game than some of their competitors.

As much as I loved instant fan favourites off ‘From the Flames’ such as ‘Rock n Roll Soul’, ‘Blood’ and ‘All The Way’, my personal favourites were the heavier hitting riffage of ‘One Man Revolution’ and ‘Fight The Fire’ as well as the bluesy ‘Devil In the Dust’ and edgy ‘Vampire’ and I think the Co. Down rockers have channeled more of the sound of those songs into this follow up album, than those earlier, more simplistic, efforts – catchy though they are. ‘Ready For The Fall’, lead off single ‘Save Me’ and the title track itself are huge slabs of pure rifferama. ‘Bow Down To The Blues’ is a catchy homage to the old Delta bluesmen that brings to mind Southern Rockers, Molly Hatchet. The instant boogie-woogie of ‘Breaking All The Rules’ is a riot that makes me think of Nazareth in their prime.

There are also some interesting new tones and textures to some of these new tunes, with ‘Streets of Gold’ being a prime example of mixing the now classic McAleenan riffage with a different sounding chorus. ‘Get Out While I’m Ahead’ has a lovely chord sequence and feel, not unlike something latter-day Foo Fighters would come up with. ‘Chase You Down’ sees a successful attempt to mix a funked (yes I said ‘funked’) up verse structure with a classic fist pumping rock chorus.

I love the track ‘Screaming Eagles’ – a battering ram of a riff straight from the ‘DC school of how to do it, but with interesting lyrics. Rather than be a clichéd theme tune about the band itself, it is actually an explanation, for those who weren’t aware, of who/what the original ‘Screaming Eagles’ were. They were the 101st Airborne Division – the U.S. parachute regiment made famous by their exploits in Normandy and Belgium during W.W.2. and immortalised by the excellent TV series, ‘Band of Brothers’. If you google ‘Screaming Eagles’ you may actually get more references to them than our local rock heroes – and when I first heard of Screaming Eagles – the band, I was a tad concerned that some may take offence at the band using the same revered name. I’d like to think this tribute to the original Screaming Eagles would put that to bed.

There is no reason at all that the ball Screaming Eagles starting rolling with ‘From The Flames’ should do anything but pick up momentum with ‘Stand Up & Be Counted’. This is a band in their prime; a band who know who and what they are, confident, assured, who have indeed…stood up and been counted. See them at your earliest opportunity and buy both of the albums, not just ‘Stand Up and Be Counted’. Support your local heroes and maybe one day they will be another international success story and you can say ‘remember seeing them at when they were nobodies..?’