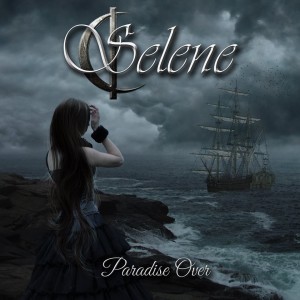 L’Derry’s symphonic metallers Selene are nothing if not prolific, releasing their first EP mere months after their formation in March 2013 and their second earlier in October this year. That first EP, ‘Among the Frozen’, was reviewed on Chordblossom around this time last year (http://www.chordblossom.com/musicreviews/selene-among-frozen), with the conclusion being that they were a band ripe with promise but lamentably let down by muddy production which resulted in talented young frontwoman Shonagh Lyons’ vocals being somewhat lost in the mix. One year on, and with the addition of Darkest Era drummer Cameron Ahslund-Glass, have Selene sorted their sound on EP number two, ‘Paradise Over’?

The EP certainly begins promisingly enough, with track one ‘Facing the Mirror’s intro of a simple piano melody being joined by strings and then a heavy chugging riff that melds with the piano. Thankfully, when Lyons’ voice joins in it is clear, strong and beautiful, despite the occasional harsher note at the bottom end of her range.

Track two, lead single ‘Not Enough’ is, as its title may suggest, a rather melancholy number, with a synth-driven thundering beat and more of Lyons’ elegant vocals. Second single ‘Still Dreaming’ follows with another piano intro and some powerful wailing guitar work.

Though the songs remain true to the symphonic metal formula (quiet intro, lots of piano/synths/pulsing beats, operatic voice), there are enough surprises on this EP to keep it interesting. Fifth track, ‘Fade Away’s accoustic intro segues into quite a folky-sounding song, with a cheerfully upbeat pace and the best guitar solo of the EP, whilst final number ‘Hourglass Fading’ starts innocuously enough with a piano intro before drifting into some quite trippy spoken words, which fade breathlessly in and out of the song. This rather lush ballad combines strings and Lyons’ vocals beautifully, along with the spoken portions (a prayer? A poem? Who knows?).

It’s the title track which really takes the crown, however. From its choral intro to its muscular drumming which really allows Ahslund-Glass to show off his prowess, the song is a real showstopper – in fact, it would undoubtedly be incredible live. Its less formulaic structure and galloping beat make it the highlight of the EP.

Symphonic metal is a capricious genre; getting the balance right between the beautiful and the burly can be a real challenge. With ‘Paradise Over’, Selene have clearly upped their game and proven that they are capable of throwing their collective hats into the ring and standing a fighting chance of being successful. And with a band this prolific, if they keep improving like this with every release, who knows how far they could go?

◀ STANDOUT ⁞ Paradise Over ▶
◀ SOUNDS LIKE ⁞ Nightwish | Within Temptation  ▶