Selene – The Ravages Of Time 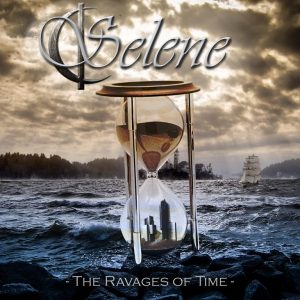 Ever-prolific symphonic metallers Selene certainly haven’t been resting on their laurels since they released their last album The Forgotten in November 2015 (read our review here), with yet another full length album, this one titled The Ravages of Time, due for release on June 23rd . Their second full length is, according to founding member and main songwriter John Connor, “a more ambitious release than the first album”, with faster, heavier moments interspersed with softer, more emotional tunes; having spent a solid year working on the album, Selene are confident that “it won’t disappoint”.

That ambition rears its head right from the word go, with opening track ‘New Era’ unveiling a rather ‘power metal’ feel which, combined with vocalist Shonagh Lyons’ voice – which grows in angelic confidence with every new release – creates a lush and glorious introduction. Symphonic metal has to walk that tightrope between heavy music and beautiful vocals, and it is patently obvious that Selene have that equation down pat.

From there, Ravages…simply ticks all the boxes of a great symphonic metal album. From the drama and whirling riff of ‘The Great Heart’ to the forceful first single ‘Ashes’, which has an almost classic rock vibe to its guitar work (think Heart’s ‘Barracuda’); from the meaty groove of ‘If Tomorrow Never Came’ (check out Lyons’ high range here) to the hauntingly beautiful ballad ‘This Life’, consisting of just strings, piano and Lyons’ breathtakingly beautiful voice, this is an album of contrasts and lush, goose bump-inducing moments.

There’s even room for the band to try out a few new things, such as a duet (album highlight, the powerful ‘Burning Bridges’, which features Maverick frontman David Balfour and a frenzy of fretwork); a vocoder in parts during ‘Our Regrets’, which lends Lyons’ voice an unexpected note of toughness, and a sprinkling of classic rock, such as the aforementioned ”Ashes’ and ‘Wonderland’.

It all ends, as with ‘Piano Black’ on The Forgotten, with an epic number of majestic proportions, in this case the eleven minute long ‘The End of Time’. Encapsulating the album’s loose theme of ‘endings’ both figuratively and literally, it contains everything but the kitchen sink – hauntingly beautiful vocals, a decisive gathering of instruments at around the three minute mark, a rather bleak midsection, a mournful outro and even timpani drums, it’s like a tragic fairy-tale set to music and is simply outstanding.

This really is an extraordinary album from this young band (who have only been around for a tiny four years!). It shows a maturity beyond their years, a willingness to expand both their inner circle and their repertoire, and – best of all – a singular talent for writing, producing and performing fantastic symphonic metal music. “Ambitious”? That doesn’t even come close.

Our Back Yard Returns For 2017