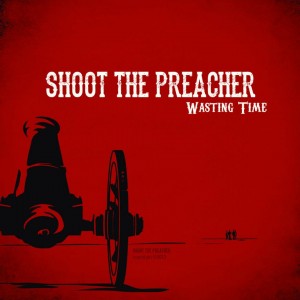 Hailing from Armagh, interesting indie quartet Shoot the Preacher recently released their debut EP ‘Wasting Time.’ Formed in 2010 the boys have seen things kick off rather quickly over the last few years, making this EP a very exciting next step for them and their fans.

Over the four tracks, we the listener are taken through various downsides of life. Bad relationships, the struggle with unemployment and growing up in working class society are just a few of the topics used in the grunge worthy lyrics cheered up with catchy hooks and riffs.

‘The Star tonight’ and ‘Don’t make a sound’ will have you singing-a-long from the first listen to the pop like choruses that could almost be mistaken as the work of Match box 20, while ‘Everything you want’ and ‘Wasting time’ could be defined as great Rock n’ Roll songs packed with riffs echoing the styling’s of the bands big influence, Oasis, that all works well with Martin Rafferty’s vocals.

It’s very clear the guys know how they want to sound, though it’s not worlds away from their influences. At times the Oasis influence is very apparent and obvious you may also be forgiven for hearing a pinch of Ocean Colour Scene thrown into the mix. Having said that their sound isn’t like anything from today’s current music scene making Shoot the Preacher a breath of fresh air for the local scene.

Runaway GO – I Would Go (Video)