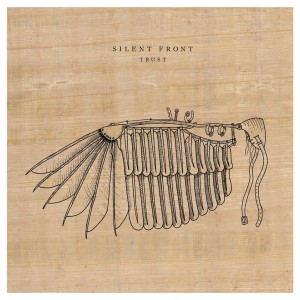 Notorious Shellac front man/engineer/grump Steve Albini once said: “Don’t structure your life or your band around the attention of people you’ve never met. Let them come to you while you do something you love doing for its own sake.”

England’s Silent Front are a band who epitomise this attitude. Their 2010 gig in Auntie Annies demonstrated their confidence, assurance and sheer love of playing music without worrying if people care or not. It’s not an attitude you see often. Musically, they occupy a terrain that will be appreciated by those familiar with Shellac, The Jesus Lizard and Fugazi. It’s a sound that is brittle, but pungent. Hence the popularity of the sound. It’s also a sound that can be considered both punk rock and alternative rock. Hence it’s popularity.

‘Mechanical Grip’ begins with the same manic energy as ‘Head’ era Jesus Lizard before going all Slint on us. The listener envisages singer Phil Mann throwing himself about the studio with the same reckless abandon as David Yow, completely possessed by the music. Even in the quieter segments, Mann sounds like he’s having a breakdown. An excellent opener. ‘Bracken’ features a NoMeansNo type bass line. Combined with the pounding drums, it is the best song never written by Rapeman. There’s a brilliant moment at 2:14 where the guitar is the only instrument playing. You need to hear it to know what I’m talking about, but it is high powered and dazzling.

Initially, ‘More Is Less’ seems like an apt title, Restrained and with delicate melodies, it’s reminiscent of the most recent From Ashes Rise single. But Mann’s vocals always suggest chaos is around the corner and a nagging, insistent guitar line gives the feel of a time bomb. The gently strummed chord that opens ‘Confiance’ indicates that this is going to be a mid paced number. And while it is, you can’t describe it as boring. Indulging in the Slint worship hinted at throughout the album, it always has something going on (melodically speaking) to keep the listener going to the end of the track. Closing with ‘Veil’, there’s a frantic, desperate feel which seems to suggest that time is running short. So everything that you love about this LP is crammed into 2:40, before fading out with some tub thumping and a minimally picked riff. It suggests that calm has been restored and it is safe to go back outside again.

Is this the best thing you’re going to hear this year? Truthfully, probably not (it doesn’t deviate from the Jesus Lizard/Slint mould and can get a bit samey at times) but it’s filled with conviction, potent song writing and unhinged yet precise performances. Ultimately, Silent Front aren’t fussed if you like them or not. They’ve been doing this since the 90’s, have managed fine without you and will carry on in this vein until they’re fed up.

‘Trust’ will be available from February 3rd via Function Records.