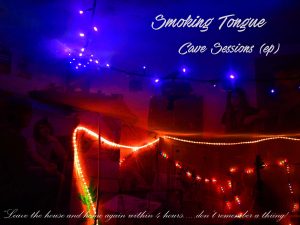 Lisburn’s Smoking Tongue came to our attention a few years back with the release of their debut EP Gak Tooth Grin (you can read our review here), but the band have actually been around for about a decade, starting off as The Cusp before changes in members and circumstances prompted the need for a new name. For this release they decided to go back to ‘the good old days’ and strip back the polished sound of Gak…, recording in their old practice room The Cave (hence the album’s name) to try and capture the organic feel of their live performances.

Opening track ‘Willis Kint (The Ballad Of)’ certainly starts the ball rolling in distinctly trippy fashion, channelling Black Sabbath at their languid best. Frontman Brendy – the only original member left – puts in a fine vocal performance here and throughout, with his pleasing timbre and rasp reminiscent of Andy Campbell from Zlatanera.

That Seventies stoner rock vibe is prevalent through the album, with tracks such as ‘Place Your Penny Here’, the ethereal ‘Judas’ Carryout’ and album highlight ‘Boris’ all dipping into the murky waters of Sabbath. But Smoking Tongue are no one trick ponies: a close listen also reveals a heavy blues influence, such as the guitar work in ‘Breathing Through Polythene’, a song that would easily slot into the soundtrack to ‘Kill Bill’, and the urgent and heartfelt ‘Caramel Slides’. There’s also modern alt rock in there, such as ‘Electric Tremors’, which utilises the tricky time signatures evident on Gak…and the Led Zeppelin-influenced, skittish ‘Pumpkin Boogie’.

There are a few small niggles: the two unnamed bridging tracks seem a bit pointless, while the minute long ‘Interlude’ sounds like it’s been recorded underwater and matches precisely none of the other songs on the album – and the less said about the closing track, a cringeworthy cover of Cypress Hill’s ‘Hits From the Bong’ the better. Yes, you smoke dope. We get it. But…no. Just no. Ok?

That aside, this is a solid album with enough twists and turns to keep the listener interested. The band have all but shed their previous grunge sound, replacing it with a ‘so retro it’s current again’ mix of stoner rock and blues, laced with a hefty dollop of modern alt rock. The Cave Sessions is definitely an example of when going ‘back to basics’ has been absolutely the right thing to do.