So Long Until the Seance – Seducing the Devil EP 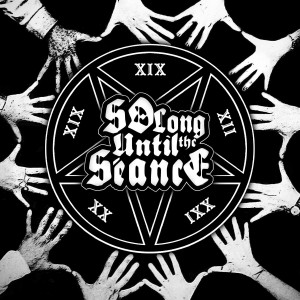 Ever since Little Miss Stakes shut up shop and stole away in the night, there’ has been a gaping hole in the local scene for a rambunctious band that dress kinda silly, wear Halloween-y makeup, don’t take themselves too seriously but can totally rock your balls off. Enter So Long Until the Séance (check out that acronym for a taste of their humour): led, unsurprisingly, by former LMS vocalist Mike Van d, they are a self-described ‘Frankenstein’s monster of previous Belfast bands’ who mix glam, horror punk and metal to create a sound that’s as moreish as it is fun. They released their debut single ‘Dead Boys’ around six months ago (read our review here); and have now released their debut EP Seducing The Devil (again, acronym!).

The EP opens with the spooky, schlock horror-vibed ‘Burn the Witch’, complete with atmospheric keys and Van D’s theatrical growl (think Dani Filth but without the banshee-like scream). It’s predominantly a horror punk track, but with hefty doses of metal and glam rock, with some brash gang vocals in the chorus and jaunty, upbeat drums. Lead single ‘Dead Boys’ follows, leading with an instantaneous hook that continues throughout, as well as some cleaner vocals. The guitar work is tight and polished, and the tune itself would fit effortlessly into the soundtrack of some cheesy Eighties horror movie (yes, that is a compliment!).

Third track ‘OverDose’ opens with a groovy bassline which joins a heavy, driving riff. Guitarist Tommy D. Bauchery takes centre stage vocally in places which adds an extra dimension to the song, as does the sexy guitar solo and stomptastic midsection. Then final track ‘Dead Pretty’ provides another catchy as hell hook; it’s very glam rock and ridiculously good fun to boot, all duelling keys/guitars and toe-tapping beat. Some gloriously hammy piano and a divinely widdly guitar solo lead to a showstopper finish that leaves the listener both exhilarated yet bereft that it’s over (full length album next, please?).

Seducing the Devil is an outstanding debut release. The production is crisp and strong, the band sound like they worked their butts off but enjoyed themselves immensely, and the songs themselves are perfect little nuggets of horror punk/glam metal goodness. Consider that gap in the market well and truly filled.

Buy the EP on So Long Until the Seance’s Bandcamp page here.