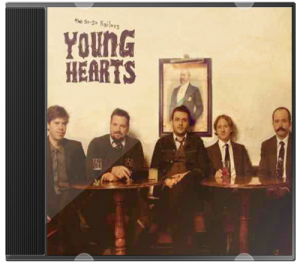 Young Hearts EP kicks off with the organic vegetable plot of emotion that is So Broken Hearted. Chris Machmuller forms the perfect vessel for a story forged along the oft-testing road of life. His vocals are most certainly the focal point of this – and every – track on this release. Aside from the soulful vocals, what we have here is a piano-centric sentiment to a heart broken girl who talks as though she ‘has not a friend in this world.’ On the down-side, So Broken Hearted feels rushed throughout the body of the song and for me this compromises the songs true content; emotion. From the song truly kicks into life with the words, “Why are you smiling when you’re so broken hearted?” the arrangement bears little obvious variety and becomes rather tedious.

Broken Glass and Blood continues in similar vein until a jazzed up break a third of the way into the track. Although a nice idea, the song drops to such a level that it must be completely built from the ground up once more. Maybe the term ‘stop’ is more appropriate than ‘break.’ What sprouts from this newly anointed stop is the constituents of an almost entirely different track. Des Moines is this EP’s saving grace thus far. Machmuller’s pain wracked voice is once again the tracks main focus. The input of chugging bass lines and the chorus’ backing vocals are welcome additions, along with the distorted guitar contrasting the piano along the back-end of the chorus’.

Title track Young Hearts starts off in delicate form and frames a more tender edge to Machmuller’s vocals. When the side-show – ahem, other instruments, join us again we are met by what is a more familiar sound from the Sailors. Chris shows off another of his seemingly endless talents with a saxophone solo in the third minute of this song. The solo matches the songs needs note for note, before some life is injected into these apparently Young Hearts a minute later to push the track towards a more mainstream audience for the rest of the song.

This Girl appears from the offset to be a kind of country-jazz infusion, to an outsider at least. For once in this EP the piano takes a back seat and merely adds to the track, rather than leads it. Gentle guitar strumming is our ever-present feature this time round. The track makes above-par background music but lacks the twists and turns or the intensity to be the focus of an Average Joe’s attention.

A disappointing release is brought to a close by River Town. For me, Machmuller’s vocals are on top form here. The breaking wave of emotion as seen in the opening track is not as obvious here so we see a smoother quality to his voice. Little snippets of the piano could be considered Cincotti-esque. River Town will certainly evoke an atmosphere wherever it is played and that again is in large part down to the vocals.

Some background research on this EP promised much, but I am sad to report that I was disappointed. That’s probably more down to my taste than The So-So Sailors musicianship. These six songs hold so much potential but I just feel the execution was lacking somewhat. Young Hearts is still worth checking out as it may well be further up your street than mine.