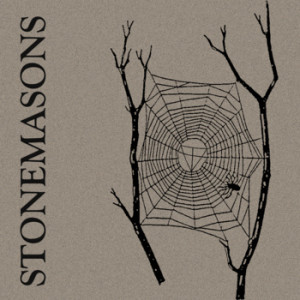 I have seen Stonemasons live and I am acquainted with their previous recorded work. I know they have talent. When I saw them live I felt they exhibited both the beauty and the folly of youth. They had aggression but not enough control and volume but not enough power and as a result I felt their songs did not come through. Their recorded work showed promise but lacked cohesion and you were never quite sure what they were trying to be :- a grunge band, punk band or celtic rock band. It’s not that you can’t have all three elements in your make-up, it’s just that I wasn’t convinced they were fully committed to each or any. But I knew they had talent.

But this did not prepare me for just how good ‘Angst & Spiders’ is. It is breathtakingly good. Three very good songs, well performed from all three members, Connor McCann (Guitars & Vocals), Padraig Kerr (Bass Guitar) and Paddy Blaney (Drums) and very well produced, with everything in its right place and a lovely ‘grungey’ sound. Yes, ‘grunge’. The ‘g’ word. It had almost become a dirty word over the past years, but it shouldn’t be. When done well, it is a magnificent sound that blends the best of Metal and the best of Punk. And Stonemasons have pinned their colours to the mast and gone for it, and it is a good decision. That Connor McCann sounds so uncannily like Eddie Vedder makes the similarity to early Pearl Jam even more pronounced, but this is not blatant copying. If anything the guitar sound and riffs are more akin to Smashing Pumpkins or My Vitriol.

The E.P. kicks off in a low key manner with ‘Audiolust’; a slow burner of a song which begins with crackling feedback that reminds me a little of very early Foo Fighters, before bursting into life. Out of the three songs, it’s perhaps not the one I would have chosen to start the E.P. but that does not detract from the quality of the song itself. ‘Black Widow’ is next up with its huge rolling riff giving way to a staccato verse melody, with McCann being about as unintelligible as Cobain, before the massive strung out ‘I wouldn’t waste my breathe on you’ chorus. It rarely lets up and just has that ‘crowd with their arms upraised’ vibe. ‘Rage & Ruin’ starts with a very dirty punky riff and just blasts along with McCann’s strong vocals full of punk aggression. Then the song breaks down and McCann’s voice and melody is so like Vedder it’s actually scary. The song is full of little breakdowns and changes which are so well done and interesting, before the final build up to the crescendo, reminding me of Pearl Jam’s ‘Brain of J’. The constant Pearl Jam references may annoy the band, but as a Pearl Jam fan myself, I don’t count this as anything but praise and, to be honest Pearl Jam haven’t written songs these good for some time. Maybe only young men can write songs like these.

All in all, it is one of the best local rock/indie releases I’ve heard this year and if the band continue on this trajectory, then the boys from the Glens of Antrim could really go places.