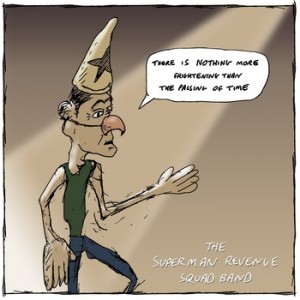 If the name Ben Parker doesn’t conjure up images of incredible lyricisms and ineffable wit then give it some time, it will. One of the most articulate writers to come burning out of England in recent years, Ben brings his every day thoughts to life in inimitable style via Superman Revenge Squad Band (SRSB.) Originally a solo project, “There is Nothing More Frightening than the Passing of Time” musically reunites the brothers Ben (Vocals) and Adam Parker (Drums) to bring a more fleshed out band sound to the previously minimalist SRSB.

The album bursts into life with the fantastic ‘Lately I’ve Found Myself Regressing.’ A torrent of auto-biographical intelligence spilling out over a driven track. The reality of getting older, looking back on growing up, Ben finds a common thought and voices it; A cross between wisdom, cynicism and observation melted somewhere in the back of his mind. Aside from the genuine, catchy chorus the song grabs a hook on some nostalgic part of the listener, thinking, “Yeah, I know that feeling too.” Continuing without effort into ‘Kendo Nagasaki’ SRSB make it clear that they have their sound pinned down, and that’s no bad thing. Closer to an emotional sound, it’s the laymen experience expressed by a poet. Hints of brass drifting into a wrought chorus among introspective verses produce a rough beauty that’s rare to find.

It becomes clearer in the third track, ‘I’m Going to Go to Bed and When I Wake Up I’m Gonna be Somebody Else,’ that SRSB hold a talent for both enigmatic song names and confessional poetry. Jumping between the first and second tense the song comes across as a pep talk, a speech delivered in the bathroom mirror or to the darkened ceiling of a bedroom. This is some of the purest evidence of how considered each word seems to be throughout the album.

Through ‘Flava Flav’ and ‘Paulie in Rocky Three’ the dial gets turned down all the way from 11, individual strings are plucked and the tone of the album shifts. By no means are these the atypical ballads found between the filler on some albums, it seems that Ben never lets his pen take a break. With both songs clocking in at around two and a half minutes everything quickly shifts back before the quieter instrumentation overstays its welcome. As if making up for lost time ‘A Funny Thing You Said,’ kicks in with the most complex introduction yet heard from the album. Ben has slowed his action-packed delivery somewhat but the quality of the song-writing doesn’t drop. A more polished and definite band sound shines throughout the track, a wider array of instruments creates a vision of great things to come. The potential of the Parker brothers being let loose with a larger budget, more time, could be great.

Penultimate track, ‘We’re Here for the Duration; slows everything down again, taking everything in for a moment and wordlessly promising a thunderous ending to come. The low point of a soaring album, a personal and less relatable track than what’s come before. “We’re here…” is a brief reminder that behind the clever rhymes and shotgun lyrics lies a real person, Ben reaches out at something but seems to fall just short of his intentions. “There is…” ends with the building storm of “The Angriest Dog in the World.” A fluid allegory of love, the final song meets every promise SRSB has made up to this point. Ben begins slowly and creates a heartbreaking soundscape, rising to meet Adams determined drumming.

“How was that?” asks Ben at the end. If this is what they have to bring in the future, what they have to promise more of, then Superman Revenge Squad Band might just be saving the world, whether or not either of them are really the angriest dog in it.