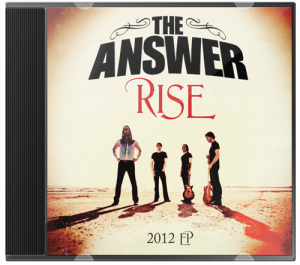 Unless you’ve been living under a rock or have had your fingers firmly shoved deep into your ears for the last 5 or 6 years you should know all about The Answer by now. As Northern Ireland’s permanent representatives on the classic rock circuit, these 4 boys from County Down are veterans at their trade and the latest single demonstrates everything they have learnt first-hand from their heroes over the years.

The title track ‘Rise’ is not by any means a new song. Originally recorded in 2004, the song has been resurrected, rewritten and re-mastered. The tender opening of the Cormac Neeson’s lyrics and Paul Mahon’s acoustic guitar work is a departure from what we would normally expect from these seasoned hard rockers. However, the crescendo builds with the introduction of violins then explodes into life as the rhythm section of James Heatley’s drums and Micky Water’s bass thrust us back in familiar territory of a record that will have you thrashing your hair around wildly with your fists in the air.

The B-side, ‘Lost’, is very much a thunderous, riff-heavy offering that we have come to expect from a rock band whose roots are deeply imbedded in electric blues and the extravagant excess of the 70’s, however that does not mean that it does not stand out on its own merits. Cormac growls and sneers his way through a story of self-awareness and rediscovery over a thumping rhythm and wailing guitar. This song would sit comfortably on any of the previous three albums and it’s almost a shame that it is only appearing as a B-Side. The final track on the EP is an acoustic version of the title track which has the same build up as the radio edit version, but gives the listener a mellower ride with the emphasis more on the lyrics which tells a poignant story of loss and recovery.

After years supporting some of the biggest names in rock ‘n’ roll, The Answer fully deserve their place at the top of the bill as a major headline act. This EP is a fine example of the collective talents of the individuals in the band. While The Answer may be known for their take-no-prisoners approach and energetic live performances, Rise shows a softer side giving an indication of how the group have matured in their arrangement and writing.