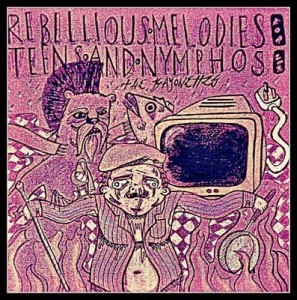 The Bayonettes new EP Rebellious Melodies For Teens & Nymphos is the follow up to the Coleraine based trio’s debut Culture Cat. No strangers to the North Coast scene, The Bayonettes formed from the ashes of My Pet Parasites and Dutch Courage, of which both Daniel Nicholl (vocals/guitar) and William Keers (drums) were members. After adding bassist Sam Foote to the lineup, the band has played numerous gigs throughout Northern Ireland since their formation in March 2012 and have, to their credit, already gained a rather steady following. So how does their latest release fare in comparison to it’s lackluster predecessor, Culture Cat?

Rebellious Melodies opens with the optimistically-titled ‘Running Is Easier When Walking On Clouds’. However, to my surprise this is probably one of the freshest sounding songs I’ve heard this year, from a local band or otherwise. Beginning with a guitar riff heavily reminiscent of Mellon Collie and The Infinite Sadness era Pumpkins, it bursts into life with a heavy dose of 80s styled alternative pop. It is heavily technical sounding throughout, with persistent nods to mid 90s alternative and yet remains accessible, with Nicholl channeling Michael Stipe style vocals.

Evocative of Showbiz era Muse, ‘Bugnets and Colourflies’ is one massive salute to the 90s. With Nicholl trying to pay tribute to the unusual combination of Bellamy and Cobain within one song and opening on a riff that would put you in mind of System Of A Down’s ‘Hypnotize/Mesmerize’, and a Nirvana slash 3 Doors Down style being emitted from the rhythm section of Keers and Foote, it’s definitely worth a listen. However if you don’t like 90s alternative, then this song probably isn’t for you.

The confusingly named, ‘Girls That Like Boys That Look Like Girls (In Drag)’ is the closest to Brit-pop or soft punk that you’re going to get on this EP. Imagine a song written by The Distillers and covered by a group of Green Day fans and you’re close.

The bonus acoustic track, ‘Hey, Violet’ ends the EP, offering a slightly different perspective. While it is certainly refreshing, it could easily have been a Siamese Dream B-Side, with dreamy but persistent acoustics and ending gently on an arpeggio.

With an impressive range of very varied influences, The Bayonettes are onto a winning combination of channeling classic rock and punk elements while being able to put their own distinctive stamp on it, which is certainly very impressive in itself. The Bayonettes are a refreshing listen, especially for all those jaded with the seemingly endless cycle of banal teenaged bands.